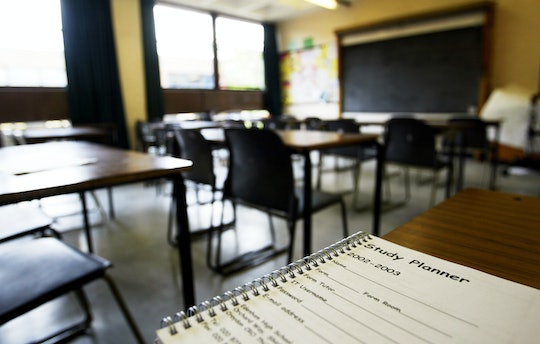 When I was in high school, I struggled with getting up in the morning and staying alert in class. My grades reflected my problems, which led to feelings of failure and confusion about what I was doing wrong. Little did I know those poor grades could be linked to my class schedule, as a new study has found. I was battling something researchers are now calling "social jet lag." It sounds like a condition related to too much social media, but it’s not. Rather, social jet lag is about circadian rhythm, which is defined by the National Sleep Foundation as a 24-hour internal clock that tells you when to wake up and fall asleep.

The condition was part of a study recently published in Scientific Reports, which studied college students over a two-year period. The study's findings showed that students who were night owls (the study called them “owls”) received significantly lower grades than students who were naturally geared to be alert in the morning and midday (the study called them “morning larks” and “daytime finches"). The researchers explained in their findings:

Larks and finches significantly outperformed owls across the day …. By midday, only owls received significantly lower grade points … and this effect continued in the evening. In the morning, finches showed a small but significant advantage over larks.

The problem wasn’t limited to night owls, however, which is why it's important for everyone to know their optimal work times. As Science Daily reported, "50 percent of the students were taking classes before they were fully alert, and another 10 percent had already peaked by the time their classes started."

Most of us can relate to jet lag caused by travel and that feeling of wanting to lay down and take a nap in the middle of the day. Social jet lag, according to the National Center for Biotechnology, is simply the same process, but the “lag” is caused by social factors like work or school schedules rather than changing time zones. A study by the University of Arizona Sleep and Health Research Program found that even in adults, social jet lag can contribute to health issues, such as heart disease and insomnia.

For teenagers especially, the struggle to get enough sleep is real. As Psychology Today pointed out, teens have a later sleep-wake cycle than most adults and they’re also just learning about making good choices and managing time. Those factors, combined with school schedules that often require them to be at school by 8 a.m., means that they are running on fumes. Throw before-school extra-curricular activities or family responsibilities into the mix and the problem just could get worse.

So what is the answer? Part of the responsibility lies with the individual. Trying to compensate for lack of sleep by oversleeping on the weekend can make the problem worse. According to Business Insider, it could help to try keeping a consistent sleep schedule with regular waking and bedtime hours. Being exposed to sunlight during the day and avoiding bright screens before bed can also help.

But for students who are fighting natural circadian rhythms that are vastly different than their school schedules, falling asleep might still be a problem. The American Academy of Pediatrics previously recommended that schools start no earlier than 8:30 a.m., according to a policy statement it issued in Pediatrics. Dr. Judith Owens, the lead author of the statement, wrote:

The research is clear that adolescents who get enough sleep have a reduced risk of being overweight or suffering depression, are less likely to be involved in automobile accidents, and have better grades, higher standardized test scores and an overall better quality of life. Studies have shown that delaying early school start times is one key factor that can help adolescents get the sleep they need to grow and learn.

The nonprofit group Start School Later was even formed to advocate for school hours that better fit the needs of students. But, as The Atlantic reported, 85 percent of schools still start earlier than that recommended time, and much of the issue simply relates to ingrained habit patterns. It’s difficult to change the status quo. One study the publication cited suggests that districts simply adopt a later start time as the new “normal” and require schools to justify starting earlier.

The college students in this most recent study at least have some control over their class schedules, though not much if the classes they need are only offered at a certain time of the day. In the short term, until adults and school officials decide how to best tackle the issue, well... it might be a good idea to buy stock in coffee.

More Like This
Teacher Shot By 6-Year-Old Student Told School He Had A Gun, Was Told To "Wait"
Florida Teachers With “Unvetted” Classroom Books Could Face Felony Charges
Keke Palmer Casually Drops Her Baby's Sex On Jimmy Fallon
Jessie James Decker's Husband Is Worried A Vasectomy Will Take Away His "Power"
What Parents Are Talking About — Delivered Straight To Your Inbox