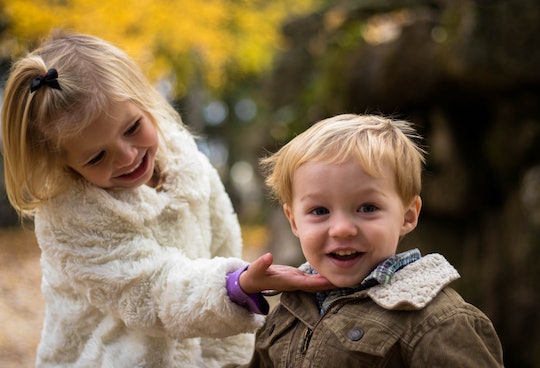 Studies Show Being The Youngest Child Is Not A Bad Gig

There are a lot of theories out there about how being the baby of the family shapes someone’s personality and behavior later in life. Some believe that the youngest child will grow up to be selfish and dependent because they’ve always been taken care of by their siblings and parents. Meanwhile, some say that those born last tend to be the most free-spirited, uncomplicated, and even at times manipulative. To set the record straight, researchers have stepped in over the past few decades to see just how much birth order plays into an individual’s personality. It turns out that studies about being a youngest child sometimes prove that these popular theories are true — and sometimes they don't.

More Like This
Apple Card Family: How It Works & What Your Kids Can Learn
Attorneys General In Nearly Every State Oppose Facebook’s “Instagram For Kids” Plan
Vaccinated People Can Ditch Masks. Where Does That Leave Kids?
Kids Can Read For A Free Personal Pizza This Summer — Just Like You Used To

As HuffPost reported, thousands of scientific studies on birth order have been conducted over the last four decades and while they've had many different conclusions, some common aspects of the personalities of youngest children appear to remain the same as the years pass. So if you ever wondered why your youngest tends to have more a chilled out vibe or why they aren't afraid of trying new things, there is some scientific evidence out there to help explain these quirky traits.

Let's have look at a few of those studies, and figure out why the babies of the family are the way they are — and how their birth order could affect them when they grow up.

According to a 2010 study published in the Journal of Individual Psychology, researchers found that, out of oldest, middle, and youngest children, the last born have the highest social interest and tend to be most rebellious out of the bunch. They study also found that youngest children tend to show the most ambition in the family, because, “if they perceive themselves to be so far behind ... they strive to catch up with the older ones to prove they are no longer babies.”

They'll Probably Be Their Own Boss

According to a 2016 study published by the Universities of Birmingham and Reading, researchers took on the "rebellious" theory and found that youngest siblings are "more likely to be exploratory, unconventional and tolerant of risk."

While this study wasn't directly correlated to financial success, it suggested that the youngest siblings were more willing to become risk-takers when it came to their careers later in life. Specifically, the study found that in families with no history of entrepreneurial spirit, the youngest of two children was 49 percent more likely to become their own boss by the age of 38.

"They are more likely to take risks, and often choose a career that is different from other members of their family," the study showed, according to The Guardian.

They're More Relaxed Than Their Siblings

According to the YouGov birth order survey, youngest children are more likely to see themselves as relaxed. As HuffPost reported, "This usually stems from having parents with a more relaxed parenting style, thanks to their experience raising their older children."

And that totally makes sense — by the time the youngest child arrives, parents are pros at raising kids and have mastered their own unique parenting style. They're not as nervous or stressed out because they've done it all before, so their relaxed vibes definitely rub off on their little ones.

They're More Likely To Pursue A Creative Job

According to a Career Builder survey from 2011, researchers found that the youngest in the family often pursue more creative careers like designers, architects, writers, and artists — which is likely related to their risk-taking behavior, since these aren't always the most financially stable positions.

Additionally, as youngest children are thought to be more ambitious and sociable, this can also translate into a creative spirit, empowering them to find themselves and do what they want.

Basically, if being the youngest child means being the chill one with a lot of friends and a fun job one day, then all the noogies and wedgies from older siblings will have been worth it.