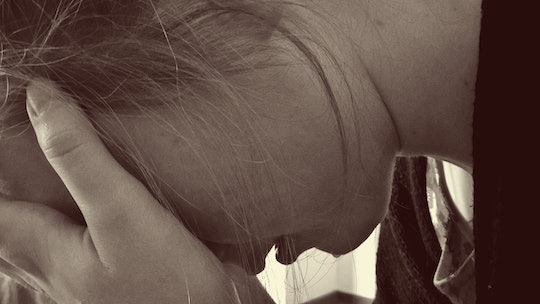 Studies About Postpartum Depression That All New Moms Should Read & Understand

Postpartum depression is very common — about one in seven women experience symptoms of it, according to the American Psychological Association. Many new mothers experience mood swings, periods of crying, anxiety, and an inability to sleep. Yet there are many myths and misconceptions about the disorder. To hear through all the noise, there are a few studies about postpartum depression that all new moms should read and understand.

There are many symptoms of postpartum depression. Some women feel irritated or angry. Some feel they can't bond with their babies. Other women feel hopeless, and can't eat because of the situation. When these symptoms last longer than two weeks, mothers may need to seek medical help.

But many women don't seek treatment because there are many myths about it, especially regarding which mothers it impacts and when.

The Study on When Postpartum Depression Starts

One of the myths about postpartum depression is when it starts and its varied severity. Many believe that postpartum disorders start within the weeks after giving birth. But an analysis of 30 studies revealed that about one-fifth of women had an episode of depression up to a year after giving birth, about half of them with serious symptoms. Depression also often begins during pregnancy.

The Study On Mothers Of Premature Babies

If a woman gives birth prematurely (meaning any time before 37 weeks), her risk of experiencing postpartum depression doubles.

"When a woman has a premature baby, there's this sense of loss," the author of the Journal of Pediatrics study Kathleen Hawes told Redbook. "They think 'things didn't go the way I expected,' and they feel a lot of guilt, worrying that they're at fault for what happened." The worries of having to care for a premature infant also can contribute to a mother developing PPD.

One of the biggest confusions surrounding postpartum depression concerns who is affected by the disorder. Among the African-American community, there is a belief that here "only white people go through" postpartum depression. But a study by the journal NP Women's Healthcare on low-income black mothers shatters that myth, revealing that twice as many low-income black mothers go through postpartum depression as higher-income white women. Furthermore, black women are half as likely to seek treatment in comparison to white women because of cultural stigmas around having PPD. For many black moms, admitting to depressive symptoms would make others see them as unfit mothers.

There is also a strong disconnect between how black mothers going through PPD view the disorder versus how they think their community views the disorder. The women studied expressed feelings of "overwhelming sadness, frustration, and stress," as well as periods of isolation and withdrawal, yet when asked about what their community thought about PPD, they believed their families associated "extreme thoughts" and dangerous behaviors, such as harming oneself or one’s children, with the disorder. Such studies encourage black mothers to learn more about PPD, to remove cultural stigmas about the disorder, and to seek treatment. Treatment options for PPD include psychotherapy and medication.

The One Study That All Moms Can Still Participate In

Another study from Postpartum Depression: Action Towards Causes and Treatment is perhaps the most important, because it is giving women currently going through depression after giving birth a chance to be part of the solution. The study, which hasn't been published yet, aims to get 100,000 women from around the world who have faced PPD symptoms to take part in the study by downloading a free iPhone app.

Women will answer 10 questions from the Edinburgh Postnatal Depression Scale, which has been used for decades to diagnose perinatal mood and anxiety disorders. Women will be given a score indicating how mild or serious their symptoms are, as well as referrals to treatment. Those with scores that demonstrate they suffer moderate to severe symptoms will be asked if they are willing to participate in the genetic study, said Samantha Meltzer-Brody, director of the UNC Perinatal Psychiatry Program. If they are, they will be sent "spit kits" from k National Institute of Mental Health so they can provide a saliva sample.

Hopefully such a high number of participants can provide more data for people who develop medicines or other treatment methods — and eventually, to prevent women from ever having to go through postpartum depression.