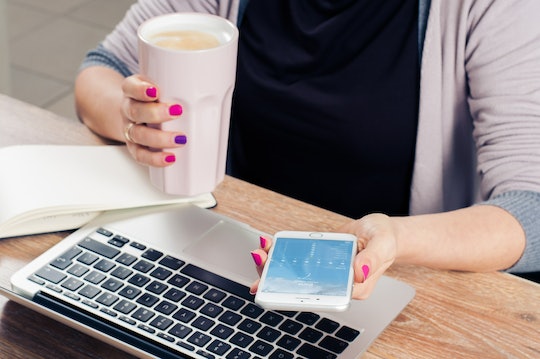 I didn't go on what you would label a traditional maternity leave. I had three months off from graduate school during a period that should have been spent on an internship. But, because of the nature of my career and financial situation, I still worked. I churned out an article within a month of giving birth in May 2015. And although I write from home, I worried that I jumped back into work too soon. It's a fear all parents have, which is why every new mom should read these studies about returning from maternity leave.

Let's face it: It's hard being a career-oriented parent. Not just because of baby-related spit-up and drama. Working mothers, in particular, are saddled with the feelings of guilt and being overwhelmed for wanting — and needing — to work. According to a study by The Ladders, 87 percent of women struggled to balance their career and their family. Of those women, 55 percent said "excelling at both is overwhelming."

I know I feel that way every minute of every day. I want to be as present in my career as I am in my family life, and vice versa. But the truth is, depending on the situation, one part of you will have to be sacrificed to the other.

Turns out, though, it doesn't necessarily have to be that way. Working parents in the United States often find themselves struggling to find that work-life balance because of a lack of supportive family leave policies. Among 41 developed countries, the United States is the only nation without paid parental leave, according to the Pew Research Center. Without a federal mandated policy, working parents are forced to make decisions they may not want to, such as going back to work sooner than intended.

And research does show that how soon you return from maternity leave can impact your child's health. According to a 2011 study published in Pediatrics, working parents are more likely to breastfeed for longer if they're able to stay on leave for an extended period. Although not every parent can or wants to nurse, studies do show that breastfeeding provides optimal nutrition for babies.

Another working paper, published this year by the National Bureau of Economic Research (NBER), showed that paid maternity leave policies up to 12 months can improve a child's health, as well as benefit a women's career advancement. The report found that women are more likely to return to work if they have access to up to a year of leave; nor would they see a negative impact in long-term employment or earnings.

The one-year mark seems to be the sweet spot. According to the NBER paper, research has demonstrated that parents who return to work after one year do see an impact on long-term wages. On the other hand, a 2010 study led by Columbia University School of Social Work discovered that going back to work within months of giving birth doesn't harm your child's health. The study found that kids are more likely to be enrolled in high-quality childcare, while mothers may see an increase in income and well-being, the Guardian reported.

But there's a caveat to this research: Children have better developmental outcomes when parents go back to work part-time, rather than full-time, after a few months. So even though returning to work after 12 weeks isn't harmful to your little one, it doesn't necessarily mean it's the ideal situation to be in if you're working full-time. A real Catch-22, if you think about it.

When shouldn't a working parent return to work, though? After a month, like I did. As Slate pointed out, at four weeks, you're still recovering from giving birth. For people who've had C-sections, like me, you still have your staples in. But, because of a lack of federal paid leave, many parents are forced to return to work before three months. And, according to Slate, research shows that's harmful to both baby and parent.

How? A parent's mental health is significantly affected by a lack of time off, leading to depression and stress, according to Slate. Children were also shown to have lower cognitive test scores and more behavioral issues at 4 years old. Parents and infants lose out on vital time together that is beneficial to the child's development process.

This, of course, isn't to judge parents who go back to work before the three-month mark. Rather, it's to stress the importance of paid parental leave policies. Parents can't make the choices that will give their children the best outcomes if they don't have the support they need to do so.

I went to work after a month because I couldn't afford not to. And now I have to worry about what impact that decision will have on my son. Is that fair? No.

More Like This
41 Strong & Sweet Baby Boy Names That Start With “K”
Festive Mommy & Me Holiday Nail Ideas To Try
The “Tripledemic” Is Scary, But I Feel Less Helpless When I Wear A Mask
101 Advent Calendar Activities, From Books To Read To Cookies To Bake