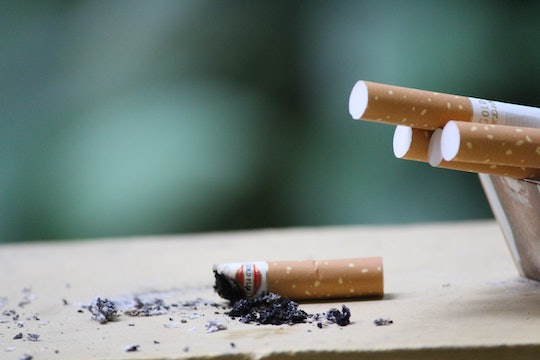 Studies On Asthma In Kids & Smoking Are Important

For decades now, researchers have warned of the seemingly endless list of reasons why cigarette smoking is a major health hazard. According to the Centers for Disease Control, smoking is still the country's leading cause of preventable disease and death, and while rates have decreased overall, they are still high among certain groups. But cigarettes, of course, aren't just dangerous for those actually smoking them, and the problem isn't limited to adults. Studies on asthma in kids and smoking show that cigarette exposure can have a profound effect on a child's asthma risk, and that the earlier the exposure begins, the more severe the condition will likely be.

That might not sound too surprising, but researchers have found that the effects of smoking on asthma rates goes beyond just parents who smoke around their kids. Studies have found, for example, that pregnant women's secondhand smoke exposure is also dangerous — even babies of non-smoking pregnant women are at a greater risk of developing asthma as children if those women were exposed to secondhand smoke. And it's not just mothers either: children with fathers who smoked prior to conception were more likely to have early-onset asthma than those who didn't, according to the CDC, suggesting that the link between smoking and childhood asthma may be more complex than originally thought.

While tobacco smoke exposure certainly isn't the only thing that can put children at risk for asthma, a 2013 study in the journal Current Allergy And Asthma Reports found that "an overwhelming amount of evidence supports an association between asthma development and tobacco smoke exposure." Like overall smoking rates, data from recent years shows that childhood asthma rates seem to at least no longer be soaring — according to NPR, between the years of 2001 and 2013, childhood asthma rates peaked at 9.7 percent in 2011. But that definitely doesn't mean childhood asthma isn't still a big problem. Asthma affects roughly 1 in 9 children in the United States, and asthma rates are rising among certain groups. According to NPR, asthma is increasing among low-income children, and black children are more likely than white children to suffer from asthma.

What do we know about the link between asthma and smoking in kids? Well, for one, it seems pretty clear that the earlier a child is exposed to cigarette smoke, the worse off they will probably be. According to Science Daily, a 2008 study from the Karolinska Institutet in Sweden found that children whose mothers smoked during pregnancy had double the risk of developing asthma before age 4 than those who didn't, and a 2014 study in the Journal of Allergy and Clinical Immunology found that children whose mothers were exposed to secondhand smoke during pregnancy but who didn't actually smoke themselves were still more likely to develop asthma than those who weren't.

That's particularly important, because in 2011, researchers from the University of California, San Francisco found that the impact of cigarette smoke exposure during pregnancy "far outweighed the role of exposure to cigarette smoke during the first two years of life" and beyond when it came to asthma rates in children. Specifically, researchers found that prenatal exposure to cigarettes makes a child 3.6 times more likely to have severe asthma, even if that exposure ends later on. Prenatal exposure is also linked to "three times the number of daily and night-time asthma symptoms later in the child’s life," and "nearly four times the number of asthma-related emergency room visits."

Fathers' smoking is a big deal, too. In 2016, researchers at the University of Bergen in Norway found that children who had fathers who smoked in adolescence were three times more likely to have asthma than those who didn't, according to Science Daily. What's particularly striking about that finding though is that fathers didn't even have to smoke around their pregnant partners or children to raise their kids' asthma risk — it was present among children of men who only smoked prior to conception.

What appeared to matter most, it seems, was how long the men had been smoking, and the age at which they started. Study author Professor Cecilie Svanes said, according to Science Daily:

The greatest increased risk for their children having asthma was found for fathers having their smoking debut before age 15. Interestingly, time of quitting before conception was not independently associated with offspring asthma.

Why would father's preconception smoking matter? The researchers believed it comes down to the "genetic and epigenetic damage" that smoking can do to a man's sperm. In other words, both mothers' and fathers' smoking histories might alter the gene function of their future children, even if they don't actually smoke around those children when they are born.

It's not entirely grim news though. While it might be too late for some parents to try to go back and prevent their children's asthma by not ever smoking, studies have found that reducing cigarette smoke exposure at any point has a measurable effect on children's health. According to Business Insider, a 2016 study looking at the impact of indoor smoking bans found that asthma-related emergency room visits dropped by 17 percent in the three years following the indoor smoking bans in public spaces, suggesting that asthma symptoms can always be improved by less exposure to cigarette smoke. And as study co-author University of Chicago immunologist Dr. Christina Ciaccio explained, "even those short exposures to secondhand smoke in public spaces like restaurants can have a significant impact on asthma exacerbations," so protecting children from exposure to cigarette smoke is crucial.

Hearing that cigarette smoke is bad for children's lungs doesn't seem particularly eye-opening in this day and age, but the fact that children continue to be harmed by exposure to smoking seems to mean that it's a message that bears repeating. And research now suggests that the risk to children of their parents' smoking might even go far beyond simple secondhand smoke. So if you smoke and have kids — or even if you might want to have kids someday — it seems like now is as good a time as ever to consider quitting.