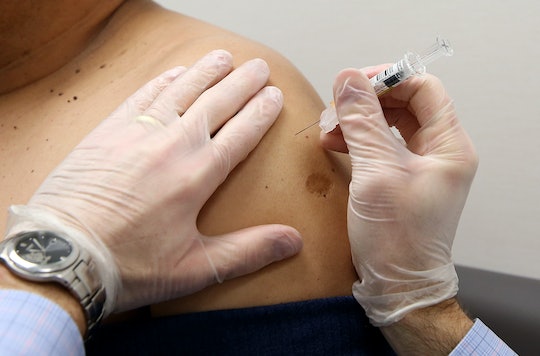 When it comes to the seasonal flu vaccine, most people seem to fall into one of two camps: they either get it each year without fail, or they regularly choose to skip it, either believing that it's unnecessary, ineffective, or possibly even dangerous. But the evidence is clear that the flu shot matters, for both adults and children. And although lots of scary-sounding misinformation may abound, studies on flu shot safety for kids show that it really isn't something parents should be afraid of.

Despite the fact that doctors and medical experts seem to overwhelmingly agree that the flu shot is valuable — the flu virus, after all, is estimated to be linked to tens of thousands of deaths in the United States each year — less than 50 percent of the population opted for the jab last year, according to the Centers for Disease Control. Among children the rate was higher (around 60 percent), but it still fell short of the recommended target of at least 70 percent. In shunning the vaccine due to fears about safety though, many parents fail to realize that they are inadvertently putting their kids at an even bigger risk. Because not only is the flu shot overwhelmingly safe, the danger of flu virus itself is often majorly underestimated.

In many ways, being a millennial parent means raising your kids alongside Dr. Google. The internet is a lifeline for many freaked out new parents — I mean, what did people do when they couldn't just search for answers for every little thing? — but the downside is that it's given rise to a subculture of "health experts" who disseminate information online that is backed by little to no scientific evidence whatsoever. And unfortunately, vaccines are one of the primary targets.

That's a problem for otherwise well-intentioned parents who get duped by these messages, but even skeptical parents can still feel intimidated — as a mom, I felt strongly about vaccinating my children, but a small part of me still worried if somehow all the people on YouTube claiming that vaccines cause autism could actually be right. The good news? Actual, proper scientists aren't even sort of wavering: the CDC notes that the safety of the flu vaccine has been studied extensively over the past 50 years, and that "hundreds of millions of Americans have safely received flu vaccines" during that time. And it's why the CDC recommends that Americans as young as 6 months old get a flu shot every year.

Side Effects Are Rare, & Usually Mild

Side effects are one of the things parents are (understandably) most worried about when it comes to shots of any kind, but in the vast majority of cases, those fears are unnecessary. The most common side effects of the flu vaccine is pain or redness at the injection site, and about 10 to 35 percent of children under the age of 2 will experience a fever within 24 hours, according to HealthyChildren.org (though it's much less likely in older children).

Any symptoms that may occur usually subside within a few days though, and in general, it's possible that the side effects are linked more to getting an injection than to the actual vaccine itself. A 2000 study published in JAMA found that study participants who received a saline injection (that is, a placebo) were just as likely to report symptoms like body aches, fever, cough, runny nose and sore throat as those who actually got the flu shot, according to TIME. And while there is a link between the flu shot and a small increase in the likelihood of developing Guillain-Barré syndrome, getting the actual flu can also cause the virus, so it shouldn't be a deterrent.

Thimerosal is a preservative that is often used in multi-dose vaccines — the flu shot being one of them. It's also a compound that contains mercury, and that can sound pretty scary to a parent, especially since some anti-vaxxers have claimed a link between thimerosal and autism. But the actual amount of mercury exposure from a flu shot is very low, and as the CDC has noted, many studies have already found that there is no connection between a child's risk of autism and their exposure to thimerosal in vaccines.

Still worried? Dr. Wendy Sue Swanson from Seattle Children's Hospital noted on her blog, Seattle Mama Doc, that it's also possible to get thimerosal-free formulations if you really want it.

It Won't Give Kids The Flu

Another big flu shot misconception debunked by science? That you can get the flu from the flu shot. The flu vaccine that most people receive is inactivated, meaning it's not a live virus, and can't replicate in the body. You can get flu-like symptoms if, for example, you also manage to pick up an unrelated bug, and according to the Mayo Clinic, it still takes about two weeks for the flu shot to become effective, so it's also possible to catch the flu virus during that time. But the shot itself can't cause the flu — it will just reduce your risk of catching the flu in the first place.

Often times, when people talk about "having the flu," they're really referring to having a really bad cold, or another kind of (mostly harmless) illness. But the reality is that the actual flu virus isn't harmless at all: even in otherwise healthy children, influenza can be fatal.

But according to Medscape, a recent CDC study published in Pediatrics found that children who died from influenza-related illness from 2010-2014 were two-thirds less likely to have had the flu shot. So even though the flu vaccine isn't foolproof (it's usually able to reduce the risk of the flu by between 40 and 60 percent, according to the CDC but not entirely), it's still by far your best bet to keep your child from picking up the virus, and potentially experiencing serious complications.

Although the flu shot seems to be one of those things that everyone has an opinion about (whether substantiated by evidence or not), the facts remain clear that the flu virus is a very big deal, and that getting the shot is definitely a good idea. So while no parent likes to take their children to get poked with a needle, it'll be well worth the trip if it helps keep them — and everyone around them — safe.

More Like This
What Is RSV?
Kids With Head Lice Don't Need To Miss School, AAP Stresses In Updated Guidelines
What Parents Need To Know After DEA Issues Warning About "Rainbow Fentanyl"
New Report Shows 80% Of Pregnancy-Related Deaths Are Preventable