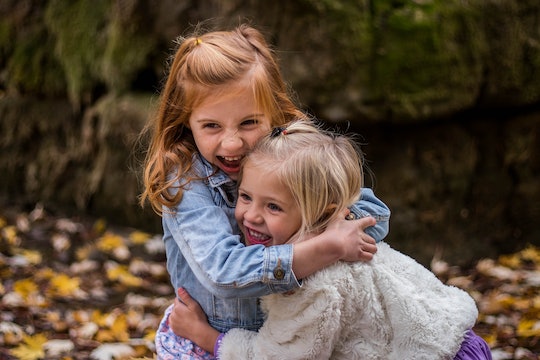 It's no secret that spanking is a hot-button issue that can produce a lot of feelings in parents. The topic of spanking often spurs heated debates about the pros and cons of the disciplinary practice, with many pro-spanking parents arguing that spanking produces well-behaved and respectful children. If you're a parent who doesn't subscribe to that theory, you'll appreciate these studies on kids who weren't spanked — it turns out non-spanked kids can be just as well-behaved as spanked kids.

Whether you're an older or younger parent, It can be hard to let go of certain notions about parenting, especially when it concerns discipline. You might have been spanked growing up, and therefore you might believe that spanking produces well-behaved children because you were respectful as a child. Or maybe you've read articles and studies arguing that spanking bodes well for compliant behavior. Although it makes sense why many people think spanking makes children better behaved than non-spanked kids, the myth has been disproven by countless researchers.

Elizabeth Gershoff, an associate professor of human development and family sciences at The University of Texas at Austin, analyzed five decades of research on spanking to determine whether or not spanking encourages well-behaved children. Gershoff's study, which was published in the Journal of Family Psychology, found that spanking can actually have the opposite effect of what it intends to do, which might surprise some pro-spanking parents. Gershoff explained, according to Science Daily:

Our analysis focuses on what most Americans would recognize as spanking and not on potentially abusive behaviors. We found that spanking was associated with unintended detrimental outcomes and was not associated with more immediate or long-term compliance, which are parents' intended outcomes when they discipline their children.

Furthermore, Gershoff found that using force can actually cause behavioral problems in children. The study found that "spanking predicted increases in children’s aggression over and above initial levels [of aggressive behavior]," and that the outcome of spanking a child is often unpredictable, according to Psychology Today.

Given that spanking has been proven to lead to behavioral problems and other issues, the American Academy of Pediatrics has urged parents to take a different route when it comes to discipline. Dr. Benjamin Siegel, chair of the AAP's Committee on Psychosocial Aspects of Child and Family Health, even argues that a less physical approach tends to be more effective. Siegel said, according to Parenting:

There's no reason to get physical with a child when other discipline tactics are more effective.

As for what these tactics are, the AAP recommends withholding privileges and time-out, for example. The AAP also suggests allowing kids to encounter natural consequences for their actions, which means that parents should let their child figure out what they've done wrong and why it's in their best interest to stop the negative behavior. If your child slams his toy against the table and it breaks, for example, don't buy your child a new toy to replace the broken one. Let your child figure out the natural consequence of his action instead of using force to get the point across. It can take some time and patience, but adhering to discipline practices outlined by the AAP and other child advocates will likely lead to consistent and positive behavior in your kids.

Ultimately, it's up to each individual parent to decide how they'd like to raise their kids. These studies aren't meant to shame parents who have spanked their kids — researchers simply want to show parents what behavioral science has to say. Whether you agree with the studies or not, researchers have brought up important points for every parent to consider.