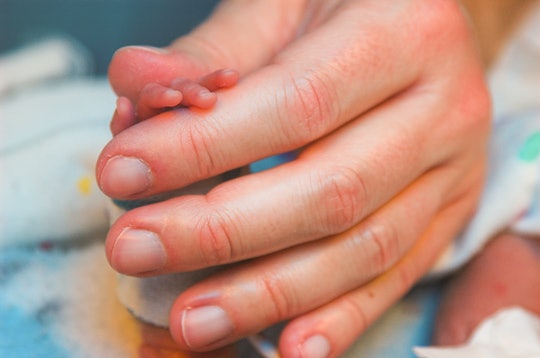 A new study published in The Journal of Maternal-Fetal & Neonatal Medicine has found that an alarmingly high number of women who experienced severe complications during childbirth also had premature births. What's more, researchers say families experiencing such "dual burden" births, or births that combine both maternal and newborn complications, are likely to face extreme stress due to concerns for both the mother and baby's health. As a result, researchers are advocating for coordinated maternal and infant care.

In examining data for the 3.1 million births that occurred in California from 2007 to 2012, researchers determined the rate of premature birth to be 876 per 10,000 births. The rate of severe maternal morbidity, which the U.S. Centers for Disease Control and Prevention (CDC) defines as "unexpected outcomes of labor and delivery that result in significant short or long-term consequences to a woman’s health," was found to be 140 per 10,000 births.

According to the CDC, severe maternal morbidity has been steadily rising in the United States with more than 50,000 women reported to have been affected in 2014, the most recent year that data was available. While the CDC has said it's not entirely clear why severe maternal morbidity appears to be on the rise, the agency warns that changes in women's overall health may be contributing factors. Such changes could include higher rates of pre-pregnancy obesity and pre-existing chronic medical conditions or increases in maternal age, according to the CDC.

In examining births in California, researchers found that a quarter of those who experienced severe maternal morbidity were also found to have had a premature birth, translating to a "dual burden" rate of 37 per 10,000 births, or 1 in 270 births.

"Imagine the deep trauma a family experiences when both the mother and newborn child are simultaneously fighting for their lives," Laura Jelliffe-Pawlowski, PhD, MS, the study's senior author and UCSF School of Medicine associate professor of epidemiology and biostatistics and UCSF California Preterm Birth Initiative's director of precision health and discovery, said, according to Science Daily. "This is the reality for 1,900 families in California, and it can have rippling effects across generations, particularly for Black families who are more likely to have a dual burden birth."

Indeed, researchers found that "dual burden" births were twice as likely to affect Black mothers, something they attributed to racism and discrimination in the health care system. "Risk of 'dual burden' was twofold higher for Black women compared to White women when controlling for all other factors," the study noted. "From an ecosocial and lifecourse perspective, racial disparities in health outcomes should be considered markers of exposure to racism, where illness and poorer health reflect the transgenerational embodiment of exposure to chronic stress from discrimination and structural inequity, rather than 'race' being a 'risk factor' for disease or poor health outcomes."

While previous studies have shown that there are documented associations between premature births and severe maternal morbidity, researchers felt there remained much to be understood about the correlation between the two and the prevalence of "dual burden" births. An what they found is concerning.

According to researchers, "dual burden" births have "immediate and persistent physical, psychological, social, and financial consequences" for families. In fact, researchers argued that experiencing a "dual burden" birth could trigger post-traumatic stress disorder (PTSD) for the mother and their partner that could potentially lead to prolonged emotional suffering, impaired parent-infant attachment, and/or negatively impact the parents' relationship.

Premature babies — or babies born before the 37th week of gestation — are reported to have a higher risk of having complications that often require special care or a stay in the the Neonatal Intensive Care Unit (NICU), according to the American Pregnancy Association. While the NICU may be the best place for premature babies, it can also be a stressful experience for parents. What's more, experiencing premature birth in general can often spur negative emotions. In fact, separate studies conducted in 2010 and 2012 found that mothers of babies born premature reported feeling more negative emotions — particularly anxiety and depression — at least one month after delivery than mothers of babies born full-term.

While researchers studying "dual burden" births in California warned that "affected families may be at high risk for distress and require proactive support for their transition to home and long-term health," they also noted that health care providers may miss important clues as maternal and newborn care is facilitated by different specialists. As such, they've argued that health care providers need to increase the attention paid to the effect "dual burden" births may have on a family as a whole.

But families can also play a role in raising awareness about the stress of "dual burden" births by advocating for themselves with doctors ahead of time or speaking to loved ones who may be affected.

More Like This
Mom Gives Birth To Record-Breaking 16-Pound Baby
What Foods Fight Nausea During Pregnancy?
OB-GYNs Explain The Connection Between Stress & Miscarriage
Is Raspberry Leaf Tea Safe To Drink During Pregnancy?
What Parents Are Talking About — Delivered Straight To Your Inbox