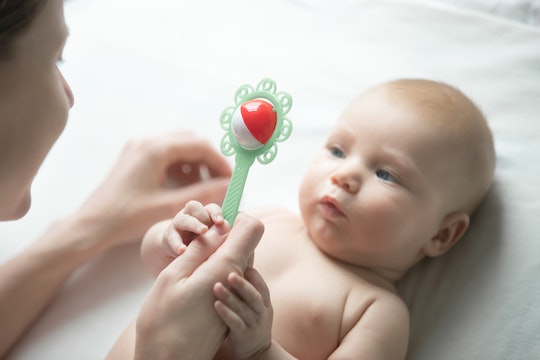 Turns Out, Babies Can Understand Your Words — Even If They Aren't Talking Yet

Although it’s a bit of a cliche saying, it’s true that babies are like little sponges. Babies can pick up on things like emotional cues and stressful environments, and they’re extremely observant. So, it’s not too surprising that researchers at Duke University, in Durham, North Carolina, recently discovered that babies can understand the meaning of words before they can talk. What is especially noteworthy, however, is that the study ultimately determined how babies best acquire language and what parents can do to speed up the learning process.

A study published in the journal, Proceeding of the National Academy of Sciences, found that babies as young as 6 months old can associate objects to words. Professor Elike Bergelson, the lead author of the study, observed 51 healthy 6-month-old babies in a trial that involved eye-tracking and images on a computer screen. On the computer screen, researchers displayed pairs of related objects, like a stroller and car, for example, and pairs of non-related objects, like a foot and a bottle of juice, according to the Daily Mail. The parent, who could not see the screen, would then be instructed to say a sentence containing one of the objects. Researchers then determined how long the baby looked at the mentioned object. The trial was conducted 32 times, according to The Guardian, and half of the trials involved unrelated images while the other half focused on related images.

Interestingly enough, Bergelson found that the babies paid more attention to the unrelated images. So, for example, if a parent said a sentence containing the word “car,” the baby would look at the picture of the car longer if it was paired with an orange as opposed to a stroller. This means that a baby knows enough about a word to “tell it apart from the unrelated referent,” according to Scientific American, and that your baby likely knows that a foot bears no relation to a dog, for example. When words are too similar to one another, however, babies tend to get confused.

In the second part of the study, researchers analyzed video and audio of 41 babies in their home environment. Bergelson and her team concluded that the more parents talked with their kids at home, the more accurate they were during the first part of the study.

Translation: talking to your babies often does wonders for their early development. And most importantly, parents should talk to their kids with purpose. What I mean by purpose is that, if you’re talking to your baby about a bottle of milk, for example, make sure that the bottle of milk is in their line of vision. Bergelson noted in the study that babies have an easier time of understanding and identifying words when they can actually see them. This information allows parents to take a more active role in their child's language acquisition, and it gives them a better opportunity to notice if there's a delay in their baby's development.

Bergelson added, according to The Atlantic:

Babies are listening, and you should treat them as conversational partners.

And Bergelson isn't alone in her thinking. Numerous studies have found that talking to your baby is an easy way to boost your child's potential and development. Professor Anne Fernald, a developmental psychologist at Stanford University, explained, according to The Guardian:

Parents who talk more to their kids are more likely to realise their developmental potential. You are obligated to feed them, wash them, and clothe them. Talk to them while you are doing it. We are not saying quit your job and home school them.

Although having full-blown convos with your infant might not be the most thrilling thing, this study proves that talking with your baby is crucial to their early development, and it suggests that parents should take a more active role in their child's language acquisition. In short: get gabbing, parents.