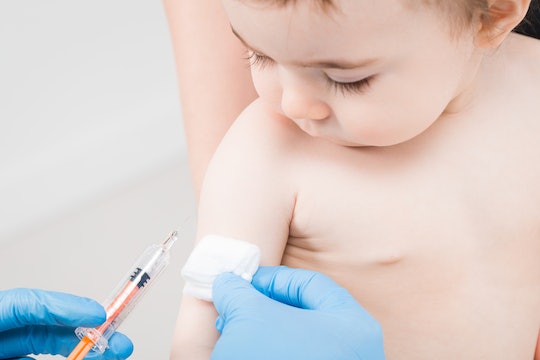 Parents for and against vaccines often engage in heated debates over social media, angrily typing their side of things to one another, citing articles and studies that support their views. As cathartic as a good rant can be, it isn't exactly effective. But, as recent study has found, there may be a better way to get through to anti-vax parents and have a better chance at actually changing their minds. As it turns out, facts aren't the way to go; adapting arguments and public health messages to be more persuasive to hesitant parents could be the key to upping vaccination numbers and protecting children from dangerous infectious diseases.

A recent study published in Nature Human Behaviour found that parents who are opposed or concerned about vaccinating their children are influenced by their moral values and personal beliefs. The Washington Post reported that vaccine reluctant parents are most concerned with the values of personal liberty and purity.

According to the study, researchers defined liberty as being associated with beliefs in personal responsibility, freedom, property rights, and dislike of governmental involvement in citizens' lives. Meanwhile, purity was associated with boundaries and protection from contamination. Essentially, personal freedom is an issue when families are forced to vaccinate and concerns over purity include aversion to heavy metals in vaccinations.

Researchers employed a social psychology theory — called the Moral Foundations Theory — to determine underlying values that can cause people to oppose vaccinations, according to The Washington Post. The study's findings are in line with reasons often given by anti-vaxxers, such as free choice and concern over chemicals in vaccines. For example, one of the most prominent anti-vaccine groups, Texans for Vaccine Choice, relies heavily on the idea of parental rights and individual liberty, according to its website.

Researchers conducted online surveys of 1,100 American parents with children under the age of 13. The surveys evaluated parents' vaccine hesitancy levels and the moral values that led them to decide something is right or wrong. Factors such as age, sex, level of education, and political views were not found to influence concerns over liberty and purity.

Pro-vaccination campaigns and public health messages often rely on factual and scientific evidence to explain the importance of vaccines, pointing out that immunization both protects individuals and those around them from dangerous infections. However, researchers warn that these sort of messages often backfire and lead to more hesitancy involving whether a parent vaccinates their child.

Doctoral student in epidemiology at Emory University and one of the study's authors Avnika Amin told The Washington Post that trying to educate anti-vaxxers may not be the way to go. “The assumption is that if we throw some fact out there, it will change their minds,” she told the publication. Since people do not make their decisions based on fact alone, fact alone is not enough to change minds. Rather, Amin recommends including morals in persuasion, such as appealing to personal liberty by encouraging parents to take personal control of a child's health and empower them to live a free and healthy life — something that they would be unable to do if deathly ill with measles, for example. Researchers warn, however, that these recommendations were not tested out and remain hypothetical based on the survey's findings.

Referring to the same study, Amin explained to New Scientist that people's core values aren't going to be influenced by fact, but that doesn't have to be the end of the discussion. “We’re not out to change what people value, but let’s work with those values to show that we’re on the same side," she told the publication.

Admittedly, it can be difficult to resist the urge to cite the scores of fact that support the importance and privileges of vaccinations. But finding ways to communicate and actually getting through to those being swayed by pseudoscience and fear appears to be the key to making real headway in protecting future generations from preventable diseases.