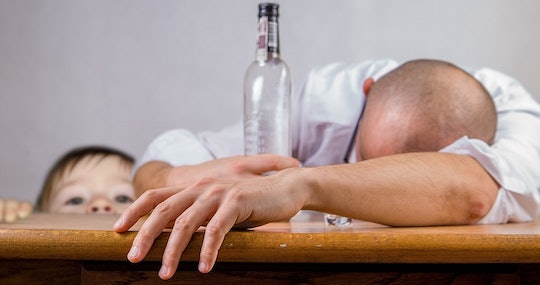 Child Abuse Can Have These Lasting Effects On Kids, New Study Finds

As unthinkable and horrific as child abuse may seem to most people, it is unfortunately quite common in the United States. The behavioral implications of child abuse are varied and lasting. And a new study has revealed just how traumatic childhood experiences harm kids later in life based on changes to the physical structure of their brains. Along with knowing the effects of child abuse, it is important to know how to spot its warning signs and discuss abuse with your children.

A study coming out of McGill University found that people who suffered severe abuse as children had changes in the neural structures of particular areas of their brains, as reported by Science Daily. In order for the brain to function at its optimum capacity, electrical signals need to travel over long distances in order to communicate with cells located in other regions of the brain.

According to the study, the nerve fibers that conduct these messages are known as axons. Longer axons are generally covered in a fatty coating known as myelin, which protects them and allows for efficient conduction of electrical signals. Myelin builds up over one's lifetime, but mainly during childhood. According to Science Daily, the researchers in this study found that the myelin coating on a significant proportion of the axon nerve fiber of abuse victims was much thinner than should be expected.

What do all of this mean? Basically, sections of the brain that are thoroughly connected in most adults are less so in those who were severely abused during childhood.

According to the study, researchers believe that these differences may be the cause of the behavioral and mental difficulties that are often associated with abuse victims — such as increased risks of psychiatric disorders such as depression, and high levels of impulsivity, aggression, anxiety, more frequent substance abuse, and suicide. This is because impaired neural connectivity, such as that found in the brains of these abuse victims, may affect the regulation of emotions.

Abuse has a permanent impact on children and according to The Rape, Abuse and Incest National Network (RAINN), nearly 1 million children are abused every year in the United States alone — and this number only includes the reported cases of child abuse. Many incidents go unreported and undetected, mainly because children are afraid or unsure how to seek help. RAINN reported that oftentimes children know their abusers and the abuse is taking place at home.

These factors make it particularly difficult for children to come forward because they may feel trapped, fearful, or even affectionate towards their abusers. This is why it is important for other adults to be able to recognize the signs of child abuse. While the signs aren't always obvious, there are some detectable physical and behavioral indicators that a child is being abused. RAINN provides a list of warning signs for child abuse:

Physical signs: Bruising or swelling near the genital area, blood on sheets or undergarments, or broken bones

Verbal cues: Using words or phrases that are “too adult” for their age, unexplained silence, or suddenly being less talkative

If you believe that a child is being abused, your next step would be to talk to him or her. However, it is important to create a non-threatening environment that will make the child more likely to speak openly. Some general guidelines from RAINN for achieving this goal include picking your time and place carefully, being conscious of your tone of voice — i.e. not too serious, talking to the child directly in language that he or she can understand, listening and following up afterwards, avoiding judgement or blame, and reassuring the child that it is not his or her fault.

After this conversation takes place, if you feel that there is something inappropriate going on, you should report it to the proper authorities. Doing so may not be easy, but it could save the life of the child in question. Visit RAINN's State Law Database for specifics on reporting in your area and more information on how to do so.

Child abuse is a serious issue that has serious consequences, as further evidenced by this latest study on the issue. It is everyone's responsibility to look out for the most vulnerable and by knowing more about abuse and its consequences, you are empowered to do so.