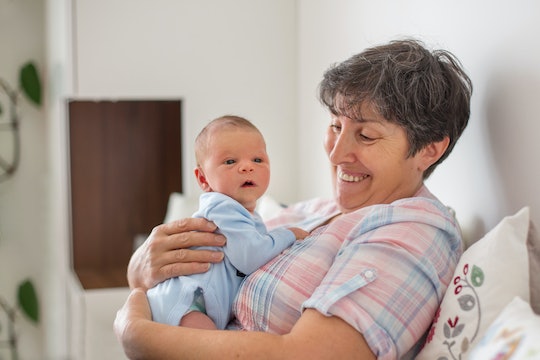 Let's be honest: parenthood is exhausting. So whenever one of my twins' grandparents offer to take them out for the day so I can get a break, you can bet I am all over that opportunity. But according to 6 ABC News, new data from the Berlin Aging Study found that it's actually a total win-win situation: the study found that grandparents who babysit live longer than those who don't, which hopefully means I totally don't have to feel guilty the next time I drop my kids off at my mom's so that I can get in bed and watch Netflix all day (uh, I mean, "get caught up on household chores").

The study followed 500 seniors aged 70 and older, and found that those who babysat their grandkids tended to be more active, and that they reported lower stress levels. But older adults without grandchildren nearby to spend time with can still benefit: the researchers found that babysitting any child on occasion, whether or not you're actually related, was still a health-booster. And according to USA Today, babysitting could provide some invaluable cognitive benefits too: a study out of Australia earlier this summer found that spending a moderate amount of time caring for grandkids could actually help prevent Alzheimer's Disease by increasing brain function and memory.

Unfortunately though, there is one major caveat: according to Dr. Ronan Factora at the Cleveland Clinic Center for Geriatric Medicine, older individuals who are their grandchildren's primary caregiver may actually age faster, and could be at a higher risk of dying. Factora said,

You want to make sure that you find that right balance between getting the positive benefits of doing enough of an activity to help those in need, and avoiding doing too much and getting to the point where the activity makes one overly stressed.

That's a totally fair point, and as any parent will likely tell you, taking care of kids day in and day out is not easy, even when you're young and in good health. So where should you draw the line? According to USA Today, older individuals who spend "five days a week or more" caring for young children could actually have "a higher risk of developing neurodegenerative disorders" — though it's also reasonable to assume that any amount of caregiving that feels stressful or overwhelming would also negate the positive effects.

For grandparents who enjoy spending time with their grandchildren every now and then, it definitely seems worthwhile to continue encouraging it. Not only can it give mom and dad what is often a much-needed break (date night, anyone?), the grandparent-grandchild relationship has also shown to do wonders for children's emotional development. Research out of the University of Oxford that looked at more than 1,500 children found, for example, that children with highly-involved grandparents had "fewer emotional and behavioural problems," than those without grandparent support, while a 2013 Boston College study found that, actually, the bond formed between grandchildren and grandparents offers long-term benefits for both parties — even into the child's adulthood.

According to Sociology Assistant Professor Sara Moorman, the study found that "an emotionally close grandparent-adult grandchild relationship was associated with fewer symptoms of depression for both generations," and that “the greater emotional support grandparents and adult grandchildren received from one another, the better their psychological health.”

As someone who grew up extremely close to her maternal grandparents, I've seen how invaluable that relationship can be, and I hope that my own children will get to develop such a bond with their grandparents, too. But even though it's easy to think of sending the kids to Grandma's as little more than a nice break from the non-stop madness of motherhood, the truth is that there are huge benefits involved for everyone when children get to spend quality time with their grandparents. And that's wonderful news all around.

More Like This
New Study Finds Brains Of Teens Who Lived Through The Pandemic Aged Faster
The 4 Main Parenting Styles & Which Is Best For Kids
When It’s Safe To Bring Your Newborn To A Restaurant, According To A Pediatrician
Can You Burp A Baby Too Hard? A Pediatrician Shares Tips For Gassy Tummies