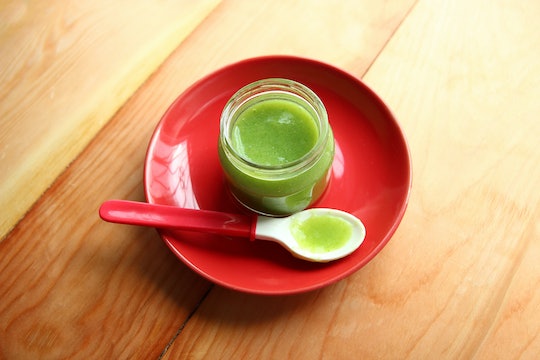 A recent Consumer Reports sampling of 50 different types of packaged toddler and baby food found concerning levels of heavy metals, but they're not going to be recalled, because it's all perfectly legal — and potentially dangerous, according to CBS News. But there are steps that parents can take in order to mitigate their kids' risk of adverse effects. The foods sampled fell into four categories: baby cereals, packaged fruits and vegetables, packaged entrées (such as meat and grain combinations), and packaged snacks, like cookies, crackers, puffs, and teething biscuits. The samples were gathered from different retailers across the country, and three samples of each type were tested.

Every single sample tested positive for least one of three toxic heavy metals: cadmium, inorganic arsenic, or lead. Over two thirds of the products had very high levels of heavy metals, one third contained levels that "warrant concern," according to food safety experts, and 15 of the products had high enough levels that Consumer Reports recommends children should eat less than one serving per day. So why are these products still on the market if they're so dangerous? Simple. There are no laws on how much heavy metal food is allowed to contain, even though it's known to be hazardous.

According to Consumer Reports, the the U.S. Food and Drug Administration — which already limits the amount of arsenic allowed in drinking water — has no such limits for food. The FDA did propose limiting inorganic arsenic in infant rice cereal back in 2016, and it considered limiting inorganic arsenic in apple juice in 2013, but it never got around to finalizing either of the rules. After Consumer Reports notified the FDA of the findings of this latest sampling, the agency responded with the following statement: "The agency has made this a priority and is working to reduce the health risks these elements present, especially to those most vulnerable: children." The FDA said it plans to finalize new guidelines by the end of year.

But we afford to wait that long? "Babies and toddlers are particularly vulnerable due to their smaller size and developing brains and organ systems," said Consumer Reports director of food safety research and testing James E. Rogers, Ph.D. "They also absorb more of the heavy metals that get into their bodies than adults do." And U.S. kids eat a lot of packaged food; a Consumer Reports survey found that more than 90 percent of parents report feeding such products to their kids at least occasionally. Packaged snacks, which fared worst in the tests, are also the most commonly consumed packed baby food; 72 percent of parents surveyed said they feed their children at least one of the items tested.

If you're patting yourself on the back right now for avoiding packaged foods, though, I've got bad news for you: the packaging isn't the problem, nor is it the manufacturers. The reason that so many of the products tested high in heavy metals is largely due to the fact that rice is a primary ingredient in so many baby foods and snacks. So even if you're making your own baby food, if it contains rice — or sweet potatoes, another common culprit — chances are your baby's getting just as much arsenic as their peers who are fed from a jar. Heavy metals get into food through contaminated water or soil, according to WedMD, so that means that even if you're a strictly organic household, it makes no difference.

So what's a parent to do? Chill out on the rice, first and foremost. Consumer Reports notes that rice cereal is often the first solid food parents serve their babies, because it's easy to swallow, and fortified with iron. But there's no reason you have to choose rice. Both the FDA and the American Academy of Pediatrics recommend giving babies other grains, as well, like wheat or oats. You don't have to eliminate rice entirely, but you should know that certain kinds are safer than others. White basmati rice and sushi rice contain about half as much arsenic as other types, according to Consumer Reports. You should also limit packaged snacks (many of which contain the offending rice), limit fruit juice (and don't give any to kids under a year old), and above all, vary their diets. The dose makes the poison, after all, and although no amount of toxic heavy metal is safe, the less they have, the better.

More Like This
What Parents Need To Know After DEA Issues Warning About "Rainbow Fentanyl"
What Is RSV?
Experts Explain Whether It’s Safe For Your Baby To Sleep On Your Chest
How To Get Boogers Out Of A Baby's Nose