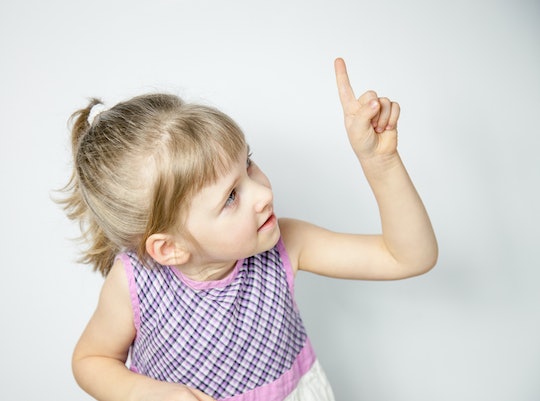 It's always fascinating to figure out when kids go from being adorable, egocentric crying machines to little philosophers capable of understanding complex concepts. Now, a new study claims to show when exactly kids develop a sense of justice, as The Verge reported. Using some interesting (and kind of dark!) methods, research published in Nature Human Behavior found that 6 is the magic age at which kids understand fairness. And how did the researchers reach this conclusion? With puppets and violence, of course!

In the study, conducted by researchers from the Max Planck Institute for Human Cognitive and Brain Sciences in Germany, 72 children between the ages of 4 and 6 got to interact individually with puppets in a miniature theater. One puppet would give the child a toy, while another would offer the toy, and then yank it away. (That jerk!) One of the puppets would go away, alternating based on the child. Then, a third puppet would arrive on the scene, and beat the remaining puppet with a stick while the puppet made crying noises. (Told you this study got dark...)

So what did these sweet angel children do?

In other words, those kids wanted justice. That puppet did something bad, and that puppet had to pay for it. And those kids were going to watch the punishment with grins on their faces.

Sure, it's a little disturbing to think of little kids paying to watch others experience pain, and to pinpoint the age at which they start wanting vengeance like miniature John Wicks. But it's also fascinating, and a great thing to know as a parent. Turns out that age 6 is not too young for serious conversations about concepts like fairness and proper discipline.

If you're still feeling a little rattled (or unsure if you want to be alone with kids ever again), you can be heartened by the fact that children's concepts of a different kind of justice may develop even earlier. A 2015 study published in Current Biology found that children as young as age 3 seemed to understand restorative justice, a.k.a. repairing the harm caused by a crime. Did this study also involve puppets? You bet it did!

According to The New York Times, puppets in the 2015 study would take toys and cookies from children between the ages of 3 and 5, and also from other puppets. The children tried to restore the stolen goods both to themselves, and to the puppets who had been wronged.

According to what the study's co-author Keith Jensen told The Times:

The take-home message is that preschool children are sensitive to harm to others, and given a choice would rather restore things to help the victim than punish the perpetrator.

Aw! All of this goes to show that the mind of a child is a strange and fascinating place, and it's a great idea as a parent to get in there and have conversations about these sorts of issues, before more puppets get beaten with sticks...