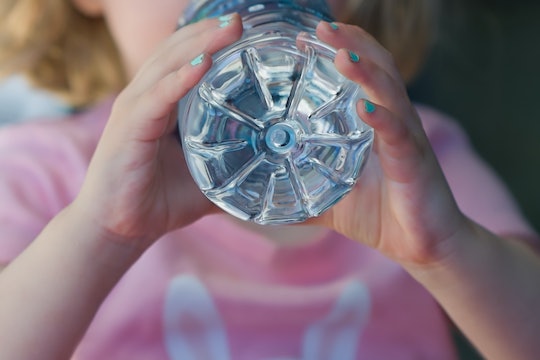 Convenience is a big part of modern life. I know I love being able to stop in at any convenience store and pick up a bottle of soda and the ease of using and storing my Tupperware. But at what expense does that convenience come? That's one question raised after a new study on plastic in children’s bodies revealed we could be doing more damage than we think to future generations as we seek to make life simpler and faster.

The study was a joint effort of the German Environment Agency and the Robert Koch Institute. The results were recently published in Der Speigel, a German magazine. For the study, researchers analyzed blood and urine samples from 2,500 kids — between the ages of 3 to 17 — from 2014 to 2017. The samples were tested for 15 plastic ingredients, and results showed that an alarming 97 percent of the samples tested positive, according to Raw Story.

"Our study clearly shows that plastic ingredients also increasingly occur in the body with increasing production," study author Marike Kolossa-Gehring told Der Speigel, emphasizing that it "is really worrying that the youngest children are most affected as the most sensitive group."

A compound called perfluorooctanoic acid (PFOA) was of special concern as it was found in 20 percent of children tested. Younger children had an even higher concentration of PFOA in their samples. PFOA is found in things like waterproof clothing, paper or cardboard packaging, or nonstick pan coating, and is carcinogenic in animal testing, according to WedMD. And that's concerning because while "more research is needed to assess the human health effects of exposure," research involving animals has shown that exposure to large amounts of PFOA can "affect growth and development, reproduction, and injure the liver," according to U.S. Centers for Disease Control and Prevention (CDC).

For example, BPA is one well-known chemical ingredient in plastic that's been banned in the United States for several years now, but replacements for it, such as bisphenol S (BPS), may be equally "risky" and have an impact on children's health, according to Science News for Students.

For instance, a different study, recently published in the Journal of the Endocrine Society, found that BPS and bisphenol F (BPF) may be linked to childhood obesity. Study author, Melanie Jacobson, Ph.D., M.P.H, of NYU School of Medicine, said that "replacing BPA with similar chemicals does nothing to mitigate the harms chemical exposure has on our health... Although diet and exercise are still understood to [be] the main drivers of obesity, this research suggests that common chemical exposures may also play a role, specifically among children."

The only real answer is to find ways to stop and greatly limit using plastics, according to Outside, which reported that an astonishing 91 percent of U.S. plastic is just thrown away, not recycled. But even recycling isn’t the panacea we once thought, as America’s largest repository for recyclables, China, banned importing them in 2017. Now some cities are simply burning their excess, according to The Guardian.

So, what can we use instead? Glass and stainless steel are two good options for replacing many household-use plastics, as Outside recommends. It may not be as convenient to carry around a glass bottle for my Starbucks, but if it's choice between that and potentially poisoning children, it's well worth the effort.

More Like This
Everything Parents Need To Know About Monkeypox
Banana Boat Sunscreen Has Recalled Products That Were Found To Contain Benzene
New York Can End Religious Exemptions to Vaccine Mandates, Says A Federal Appeals Court
9 Labor Day Weekend Getaways In New England That Are Perfect For Families