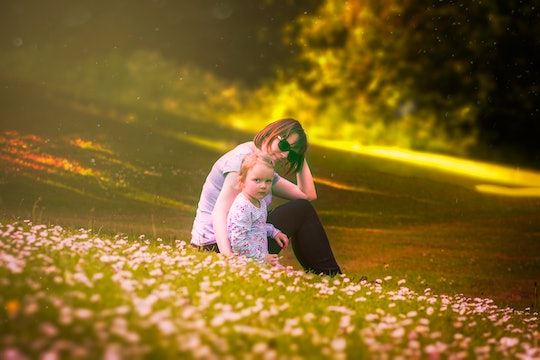 People Mom-Shame Way Too Much & A New Poll Proves It

Posting photos of your children in their day-to-day can, inadvertently, welcome criticism. Why is your little one bottle-feeding? You're at work? Shouldn't you be home with the kids? It's probably not surprising, then, that a recent study proves people mom-shame constantly. And that's a huge problem.

There are so many different ways to parent, and the need to assert your own style and decisions over someone else's is just a useless exertion of energy. Moms get this, but it doesn't stop the remarks from coming, and, more often than not, the comments are from people who are closest to the kids. Whether the aggressions are typed out online or said plainly and in person, mom-shaming is a problematic trend that just doesn't seem to be going away.

The University of Michigan C.S. Mott Children's Hospital found in its recent National Poll on Children's Health that nearly two-thirds of moms have been mom-shamed, with family members mom-shaming the most. The 475 mothers surveyed, all of whom had at least one child under the age of 5, shared that discipline, diet/nutrition, sleep, breast versus bottle-feeding, safety, and child care comprised the bulk of the unwarranted commentary.

The impulse to mom-shame is often fed by the shamer's deep-seated insecurity. Sarah Clark, the co-director of the study and associate research scientist in the department of pediatrics at the University of Michigan, explained to Yahoo Beauty:

When you’ve struggled with something and decided that the best thing is X and you see someone choosing something else, it calls into question your choice a tiny bit — and therefore, they must be wrong. But there are very few things that are "right" or "wrong." Putting your child in a car seat is right, but what daycare they go to or how you feel about breastfeeding is just a choice.

Suffice it to say, mom-shaming happens more than it should. The survey found that 42 percent of mothers felt less secure about their parenting choices after being shamed, and that insecurity is unwarranted and can be detrimental. "For mothers struggling with anxiety," researchers explained, "one seemingly innocent comment can become a tipping point into potentially harmful uncertainty." So whereas a comment might seem innocuous, the implications can still be harsh.

A bit of good news, though? After feeling the effects of mom-shaming, the respondents were less likely to mom-shame others, so there's certainly some momentum to build upon. If moms can unite with one another — and against external, shaming forces — then maybe everyone will feel a little more free to parent as they so please.

Moms are doing the best that they can. The tremendous responsibility to raise a child isn't taken lightly, so nitpicking over conscious, weighed choices is an utter waste of time and, on top of that, flat-out annoying. Next time you're mom-shamed, just send the shamer a link to this study and a side-eye emoji; They'll get the hint.

More Like This
Reddit Applauds Mom Of Five Who Stood Her Ground & Left Sleeping Dad Behind
21 Back-To-School Instagram Captions For All The Feels
Dr. Jill Biden Just Delivered Some Frank, But Powerful, Advice On Motherhood
10 Parenting Lessons We’ve Learned From 'Only Murders in the Building'