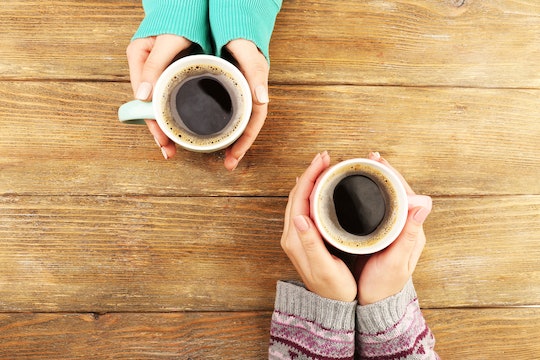 Your Daily Coffee Habit Might Actually Be Good For Your Health, So Have Another Latte

There has been a lot of debate about the risks and benefits of coffee. From old wives' tales about stunted growth, to concerns over excess caffeine consumption, caution has been often advised. But a recent study suggests that drinking three cups of coffee a day might actually be good for your health. While there are still some concerns, that afternoon pick-me-up cold brew no longer constitutes a guilty pleasure. And for those of us with coffee addictions that would put Lorelai Gilmore to shame, this is good news.

The recent study, published by BJM pulls from the findings of over 200 past studies. According to researchers, those who consume three to four cups of coffee a day could experience a myriad of health benefits including lower rates of certain cancers, cardiovascular disease, and liver disease, as Glamour reported of the findings. Researchers also found that coffee can lower chances of Type 2 diabetes, dementia, and stroke. Additionally, drinking coffee could also extend the drinker's life by years. It should be noted, though, that the study did not explore the implications of drinking more or less than the examined amount.

Of course, this is not the final say on the result of moderate coffee consumption and there will likely be more studies in the future. As this is an observational study, researchers are unable to state with complete certainty that the health benefits are solely the result of coffee consumption. Paul Roebick, professor at the University of Southampton and one of the study's co-authors, told the BBC that "factors such as age, whether people smoked or not and how much exercise they took could all have had an effect."

Also, this isn't the first study to find coffee to be a healthy choice. Past studies have have suggested that coffee can extend people's lives and even reduce damage caused by drinking alcohol. But the large scope of the recent study gives hope to everyone obsessed with coffee, regardless of whether you're Team Starbucks or Team Dunkin' Donuts.

The health benefits of large amounts of coffee do not extend to everyone, however. For example, the American Pregnancy Association recommends limited caffeine intake for pregnant women. Studies have shown that caffeine, a stimulant, causes a spike in blood pressure and heart rate — two things that are not good for mama or baby.

Caffeine also passes through the placenta to the fetus, and regardless of how well a woman handles her java buzz, baby's metabolism is still forming and won't be ready to go cup for cup with mom for a number of years. Due to the conflicting results of studies about coffee consumption during pregnancy and the possibility of risk, the APA recommends that pregnant women limit their caffeine consumption to 200mg or less per day — roughly one standard sized cup of coffee.

It's also worth noting that it is the coffee itself that may be good for you, not the foo-foo add ins of something like a Venti iced low-fat salted caramel Frappuccino. Adding too much to your coffee could make the drawbacks outweigh the benefits. Adding sugar, milk, and other flavorings to your brew brings increased calories, sugar, fat, and saturated fat to the mix. In order to reap the benefits of coffee to the best of your ability, researchers involved in the study recommended keeping your drink as basic as possible: ideally drinking it black.

Life is all about balance and coffee drinking is no different. Roebick explained to the BBC that it comes down to risks and benefits, "There is a balance of risks in life, and the benefits of moderate consumption of coffee seem to outweigh the risks."

I, for one, will take those odds. And another cup of dark roast, while you're at it.