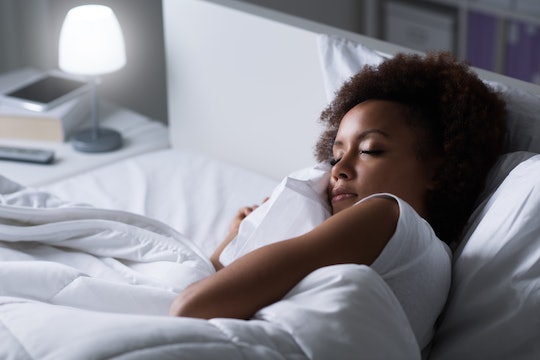 Getting A Good Night's Sleep May Improve Your Chances of Pregnancy, Study Says

When you’re trying to conceive, getting advice to “just relax” might be one of the most infuriating things you can hear. The relationship between stress and infertility isn’t completely understood by the medical community, but it’s certainly true that worrying over a failed cycle, a medical diagnosis, or even how to pay for fertility treatments can cause you to lose sleep. That’s why anyone struggling to conceive might grit their teeth after hearing the findings from the latest study on sleep deprivation and fertility. According to research presented this month at the American Society for Reproductive Medicine annual congress, getting a good night’s sleep may improve your chances of getting pregnant.

Researchers told The Independent that the study also suggested the adverse was true: female patients who get less sleep were more likely to have problems getting pregnant. According to the outlet, the study followed some 208 women who were being seen at the Kobe City Medical Centre in Kobe, Japan for in-vitro fertilization (IVF). The patients were asked to fill out a questionnaire on their sleep habits, including questions on their overall sleep quality, how many times they woke up at night, whether they used sleeping pills, and how much alcohol they drank while trying to conceive.

The researchers found that women who reported mild to severe difficulties sleeping were less likely to have a successful IVF cycle, according to The Independent. The outlet reported that the eggs of women without sleep problems were successfully fertilized 62.9 percent of the time, compared to 57.1 percent for those with mild sleep difficulties, and 48.4 percent in patients with severe difficulties.

Sleep consultant and author Lucy Wolfe, who was not involved in the study, told the Irish Independent that the study's findings supported the idea that getting seven to nine hours of sleep should be “non-negotiable” for women who want to get pregnant. She told the publication:

Studies consistently highlight that sleep needs to be at the top of the health conversation as a prevention to illnesses and as a remedy too. Remembering that small adjustments can make a big difference to your sleep tendency and it is not to be underestimated.

When trying to conceive, women should “limit exposure to electronics before bedtime, decrease or eliminate alcohol and caffeine intake and have a regular sleep schedule seven days a week,” Wolfe added.

Of course, this advice might be frustrating for those who have dealt with infertility. One of the most common (and usually unhelpful) suggestions that people give to couples with fertility issues is to “just relax,” as though deep breathing alone can overcome blocked fallopian tubes, uterine disorders, fibroids, and other common medical causes of infertility.

But, Wolfe told the Irish Independent that there is some scientific basis for recommending rest as part of a patient’s treatment plan. “Academics believe sleep patterns affect fertility by altering levels of certain hormones,” she told the newspaper. “Being short of sleep also raises a person's stress levels, which is another conception-related factor.”

The new study is part of a growing body of research looking into the connection between stress and fertility for female and male patients. Late last month, a different research team presented findings at the ASRM annual congress exploring the high stress levels that infertility causes in men. And back in 2013, another team examined the effects that too much sleep — as one might see in fertility patients who are also battling depression — can have on IVF cycles. One researcher associated with that study explained the possible connections between sleep and infertility in an interview with HuffPost:

We know that sleep habits can certainly alter circadian rhythms, hormone secretions and menstrual cycles. [But] the effect on infertility is a little harder to tease out, because there are so many details that are hard to control for. For instance, sleep quality and other patient variables, such as stress and weight, which have known effects on fertility can also have effects on sleep. So it becomes a chicken and egg dilemma.

The idea that both women and men who are struggling to have a baby might have trouble getting a full night’s sleep is probably no surprise. And hearing more advice that their chances might be improved if they “just relax and get more rest” probably doesn’t feel helpful. Still, this research suggests that the hormone-regulating properties associated with getting adequate sleep could help boost the chances that some fertility patients will get pregnant — as long as it’s part of an overall treatment plan designed to address (or overcome) the reasons for their infertility.