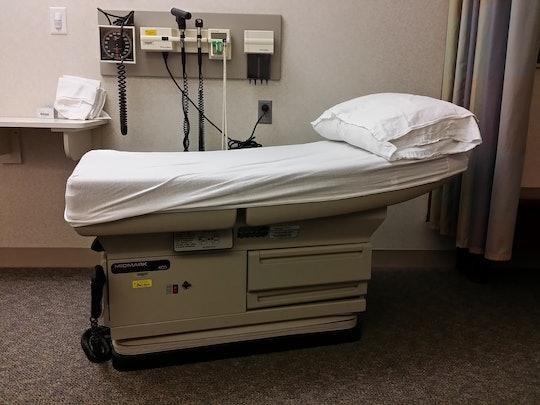 Many people dread getting a Pap test — a routine part of a gynecological exam that can detect changes in the cervix, which could indicate cancer, sexually transmitted disease, or any number of other conditions. A new study indicates that the Pap test could be useful for something else, too: Pap smears might be able to detect birth defect risk.

While Pap tests (also called Pap smears) are often referred to as being part of a woman's regular health check-up, anyone with a cervix should have one. Pap tests are usually done in the gynecologist's office, or a reproductive health clinic. The provider uses a swab (it looks a little like a giant cotton swab) to take samples from the inside of the vagina and cervix (the opening to the uterus). The samples are viewed under a microscope to be analyzed for changes or abnormalities in the cells that could be a sign of cancer or other diseases.

Starting at the age of 21, cervix-havers are advised to get Pap tests every three years, according to the American Cancer Society's guidelines. If their risk of reproductive cancer is higher (like if they have an immediate relative with cervical cancer) their doctor may want them to have the test more frequently. For those who are pregnant, Pap smears are common in the early months of pregnancy.

A recent study conducted by researchers at Wayne State University found that routine pap tests done early in pregnancy may be able to predict birth defect risk earlier than other common prenatal tests, according to CBS News. The study was small, and researchers said their findings need to be replicated, but what they found was encouraging.

The developing fetus sheds some of its DNA (in the form of cells called trophoblasts) into the reproductive tract of its mother. Those cells are then picked up during Pap smears, along with the mother's cervical cells. While the number of fetal cells is small, researchers believe that if those cells can be separated from the mother's and tested on their own, any genetic defects in the DNA could be discovered, and any possible birth defects detected, according to STAT.

The researchers were able to separate the DNA of 20 mom-fetus pairs in their study, all of whom were at 19 weeks gestation. They then mapped the fetal DNA to look for genetic abnormalities that could indicate possible birth defects. Researchers also suggested this technique could be used to identify problems with the placenta, too, since trophoblasts are also the cells that get the placenta growing.

While the researchers told STAT that their findings are preliminary, if the technique is proven to be more widely applicable and the results reliable, it could be an incredible asset to moms-to-be and their doctors. Many parents worry about the risks of tests like amniocentesis, the current go-to test for detecting genetic abnormalities in the fetus. While amniocentesis is more invasive than a Pap test, the risks are few and the test is generally considered safe, according to the American Pregnancy Association. But, unlike Pap tests — which can be done very early in a pregnancy — amniocentesis is usually performed between 14-20 weeks. Having the option to test earlier, and in a more non-invasive way, would likely be appealing to both parents and providers.