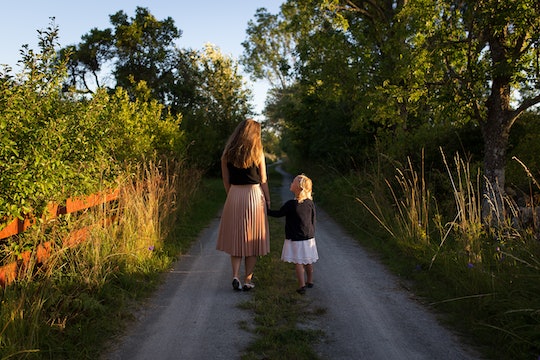 Sometimes, after falling into a rabbit hole of reading articles about sharply-dropping fertility rates, it can seem like waiting to have a kid is a terrible idea. Why take the time to build your career and figure out what you want in a relationship when your biological clock is ticking ever more loudly? Don't you know that, unless you have a kid tomorrow, you're doomed?? But hold on a minute! A new study shows that children born to older parents have some surprising advantages, which include being healthier, taller, and more well-educated. So you can climb out of that rabbit hole and re-enter your real life now.

The study, published by the Population and Development Review, used data from more than 1.5 million men and women in Sweden to draw its conclusions. (I'd say that's a pretty acceptable sample size.) The researchers, from the Max Planck Institute for Demographic Research and the London School of Economics, found that children born to older mothers were more likely to go to college. They also did better on standardized tests than their older siblings, who were born when their mothers were much younger, and they were taller (I mean, that's nice?) and healthier. These study findings included children whose mothers gave birth to them up to age 45. Overall, the researchers posited, these benefits were strong enough to counterbalance or outweigh any potential health risks that come from waiting to have kids. Yes, if you've been planning on waiting, you can do a happy dance now.

So why do these benefits show up? The researchers offered a simple explanation. Over time, social and medical conditions tend to improve, especially in a socialist paradise like Sweden. Consider a hypothetical woman who thinks about having a baby at age 20 in 1970, but actually waits to have one until age 40 in 1990. Healthcare and education have both gotten stronger in the years she waited. As researcher Prof. Dr. Mikko Myrskylä said, "Those 20 years make a huge difference." To that end, these findings might not apply in places where progress has stagnated, but it's likely that they would apply in the United States, where the average age of women having their first kids has been reaching record highs.

"We need to develop a different perspective on advanced maternal age," Myrskylä said in a statement, advocating that the general public become aware of the advantages as well as the risks associated with later childbirth. So next time your biological clock won't shut up, just remember — if you wait, your child has a better chance of being much healthy (and model tall, because that's important right?).