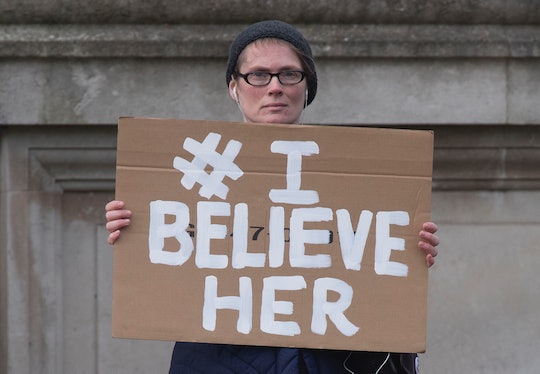 Science Proves "Freezing Up" During Rape Is A Real Thing

Unfortunately, the conversation around rape and sexual assault hasn't exactly progressed much in recent years. And while the act itself is reprehensible enough, many victims also have to deal with the fact that they might not be believed when they come forward about their attack. Rape victims have to deal with so much already, including possible cases of post-traumatic stress disorder, anxiety, and more, yet many will argue that they didn't do enough to stop their attacker. However, a new study shows that rape victims who freeze up during their attack are actually experiencing a very real biological response. And, as many survivors know, this feeling of being unable to move while being attacked is extremely common among rape and sexual assault victims.

According to the new research, while "active resistance is considered to be the 'normal' reaction during rape," that doesn't necessarily mean that fighting back is what will always happen. The researchers added, "Studies have indicated that similar to animals, humans exposed to extreme threat may react with a state of involuntary, temporary motor inhibition known as tonic immobility."

Because of this, scientists attempted to discover just how strong of a correlation there was between women who were raped, and feelings of tonic immobility, or TI. The results showed that 70 percent of the 298 women surveyed "reported significant tonic immobility and 48 percent reported extreme tonic immobility during the assault."

As The Washington Post aptly wrote, "Freezing is a brain-based response to detecting danger, especially a predator’s attack," meaning that when a victim is being attacked, the brain might not know what to do. So, all the accounts of assault where survivors describe feeling "paralyzed," or "stuck," actually make a lot of sense scientifically, as well as emotionally

While the abstract of these new findings aren't exactly rays of sunshine, the ramifications of what they mean for survivors certainly could be. As the authors of the study noted, "Knowledge of this reaction in sexual assault victims is important in legal matters and for health care follow-up." So now, when a rape victim goes to court to give their testimony, this research will (hopefully) help to prove that not fighting back doesn't mean it wasn't rape.

Rape and sexual assault are violent, horrible acts that make the victim feel powerless, out of control, and ashamed. Having a human reaction — being terrified to the point of freezing up — is completely understandable, and should be taken seriously by anyone who oversees legal proceedings regarding such cases. While the hope is that these new findings will serve to improve the justice system's response to reports of rape, victim-blaming is still extremely prevalent in today's society, and change likely won't happen overnight.

If nothing else, these findings are at least a promising start.

If you or someone you know has experienced sexual assault, contact the National Sexual Assault Hotline at 800-656-4673, or online here.