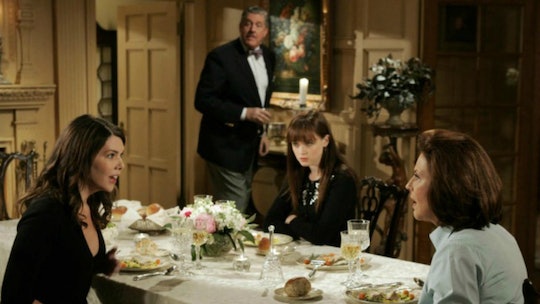 Most people recommend not talking about politics at the dinner table in the name of keeping the peace. But a new study suggests that you should call bigoted people out when they say something awful during dinner, if only because it makes them think about what they're saying. Yes, really. It's hard to imagine talking someone out of co-signing President Donald Trump's refusal to disavow white supremacists or other controversial views, especially since the political climate is so polarizing right now. But it might be worth a shot.

Kimberly Chaney and Diana Sanchez, two researchers from Rutgers University, published their research in the Personality and Social Psychology Bulletin, showing that people usually react pretty positively when they're confronted.

Alright, maybe in the moment they get defensive or it turns into a big fight. But Chaney and Sanchez found that most people who are confronted feel a little bad about what they say and "consciously try to avoid repeating such statements," according to a press release of the study published in Eureka Alert. Sanchez explained:

We found that participants who were confronted felt bad about their behavior, ruminated more, showed an enduring prejudice reduction. And we didn't just look at their immediate response, but looked at them a week later.

So if something's bothering you, it's not a total waste of time to speak up.

The researchers broke university students into two groups and all of them self-identified as white. According to the study, Sanchez and Chaney showed each group of people a series of images that had a sentence paired with it and then asked them to make one inference from the photo and the caption. So, there might be a picture of a person of color and the caption says, "this man spends a lot of time behind bars."

The images and sentences were meant to illicit a bigoted or stereotypical response. So if someone said something bigoted about that image like, "he must be a criminal," the researchers would push back and ask how they knew or say something like, "whoa, that's a little judgmental, maybe he's a bartender and spends a lot of time behind bars," according to the research.

When they brought the people back a week later and did the same exercise, the people they corrected were "markedly" less bigoted in their responses, according to Eureka Alert. A second group did the same thing, but also answered a questionnaire about how they felt about the experience and that group, too, was less prejudiced the second time around.

Of course, this might not work for everyone. Like, can you imagine getting Trump to change his mind? Not likely. But university students at least thought twice about what they had said and the perceptions they shared with the world.

Sanchez told Rutgers Today, “I think this is important because we need to understand what reduces prejudice. Confronting people is hard, and unless people know it will be effective, they won’t do it."

It is good to know that suggesting that someone is wrong, in public, can affect their behavior, if not their beliefs. There are a slew of studies that show people really stick to their confirmation bias and that even when presented with facts, tend to not change their mind. So lecturing your family with statistics and actual facts about, say, immigration might not do any good.

But calmly saying, "you know, it's pretty racist to assume that all immigrants are criminals," might be worth a shot according to the Rutgers study. Of course, when it comes to family, you always want to trust your gut.

But there are so many things happening these days that are pretty unacceptable, like victim-blaming all of the Hollywood sexual assault accusers or making excuses for white supremacist rallies. While the end goal might be to *actually* change someone's mind, knowing that you can at least make someone stop and think is encouraging.

More Like This
Biden Signs Law Banning Unsafe Infant Sleep Products Attributed To Over 200 Deaths
This Free Website Connects Parents Who Need Formula With Those Who Have It
13 Moving Photos Of Kids, Families, & More Protesting Abortion Rights Across The Country
Gov. Abbott & Other Republicans Condemned President Biden For Feeding Immigrant Babies