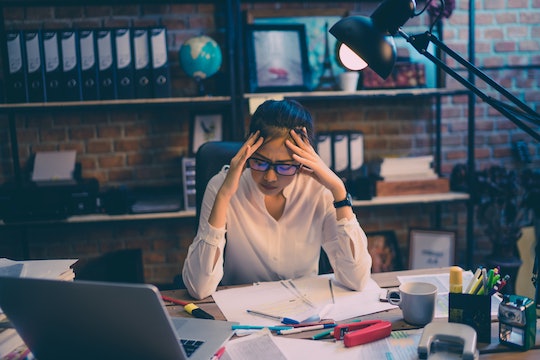 Work all day, every day; that is the reality of life for many women in the U.S. and it is taking a toll on their health. A recent study found that women who work long hours have a higher risk of developing diabetes, unlike their male counterparts. While the exact reason why women are at this risk remains unclear, researchers speculate that it could have to do with the second shift of work that awaits many women at home, including chores and childcare.

The study, published in the journal BMJ Open Diabetes Research & Care, examined 12 years of data from 7,065 Canadians. The team of researchers, led in part by the study's co-author Mahee Gilbert-Ouimet — a postdoctoral fellow at the University of Toronto — determined that women who regularly worked 45 hours or more a week were at a greater risk of developing diabetes than those who worked between 35 and 40 hours weekly, according to CNN, a 63 percent greater risk to be exact.

Their findings remained true even when factors such as smoking, exercise, and alcohol intake were taken into consideration. Men did not have the same risk, and in fact had a lower risk of developing diabetes when working such long hours, Time reported.

The study's findings didn't explain why there was a gender difference, but Gilbert-Ouimet posited that it could be due to the "unpaid work that they do on their off-hours." She told Time:

I was surprised to see the somewhat protective effect of longer working hours among men. Among women, we know women tend to assume a lot of family chores and responsibilities outside the workplace, so one can assume that working long hours on top of that can have an adverse effect on health.

Another potential explanation includes the gender wage gap that also appeared in Gilbert-Ouimet's findings. As she told CNN:

Even when men and women do similar work, women earn less. Of course, that would impact women's health. Think about the stress of working harder and getting less for it. It's important for us to study women. They are still under-evaluated in most areas of health, and it's a real shame, because if we look closer, there are still big inequalities.

Increased stress brought about by increased work hours could also play a part, according to CNN, as a link between stress and diabetes has been established by past research. Being overworked can also lead women to neglect their eating and exercise habits, another contributing factor to diabetes.

Along with sparking changes in employers, Gilbert-Ouimet told Time that she hopes her findings will lead doctors to explain to their patients how working long hours can affect their health:

I think physicians should ask the question of how many hours a week their patients work. And if women also have risk factors, then they should discuss more followup visits or screening tests for diabetes.

An increased risk of developing the disease isn't something that women should take lightly. The American Diabetes Association reported that diabetes can be "especially hard on women." This is because it can influence both the women themselves and their offspring:

Diabetes can cause difficulties during pregnancy such as a miscarriage or a baby born with birth defects. Women with diabetes are also more likely to have a heart attack, and at a younger age, than women without diabetes.

Additionally, diabetes increases a woman's risk of depression and eating disorders. All of these findings should serve as a warning to women pushing themselves to work longer, harder hours, as well as employers pressuring them to do so.