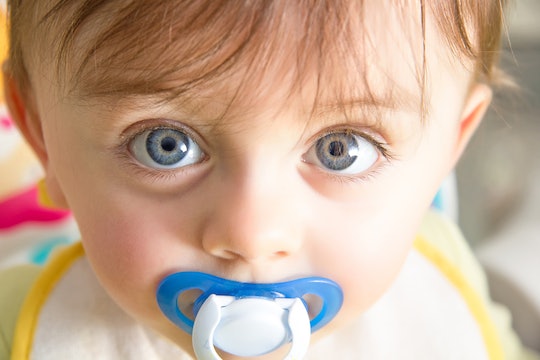 Study: Sucking On Your Baby's Pacifier May Offer An Unexpected Health Benefit

When it comes to parenting, it seems everyone takes a different approach to shielding their little ones from germs. When you're a nervous first-time mom, sterilizing everything might be your go-to, but as time progresses, "cleaning" the pacifier your baby just dropped for what seems to be millionth time might come to simply come to involve popping it in your mouth for a quick rinse. Obviously that's not exactly the best way to get it germ-free, but a recent study has found that, actually, sucking on your baby's pacifier could protect your child from developing allergies, and it's more evidence to suggest that, when it comes to young kids, a little dirt might do them some good.

Dr. Eliane Abou-Jaoude, an allergy fellow with the Henry Ford Health System in Detroit, told CNN that the microbes babies are exposed to as infants affect the way their immune systems develop. And while parents obviously want to keep their children safe from potentially harmful germs, the bacteria present in mothers' saliva appears like it could actually offer some benefits, the research found, as Fox News reported.

At the same time, there were some definite weak spots in the research. For one, the sample size was very small, and the findings — which have not yet been peer-reviewed — also can't quite suggest a cause-and-effect relationship, according to CNN. So while Abou-Jaoude isn't necessarily recommending that all parents start sucking on their kids' pacifiers, the findings do at least appear to build upon the already-existing research into the role exposure to microbes plays in the development of allergies.

A long-term study of children in New Zealand in 2016, for example, found that while parents often try to discourage habits like thumb-sucking or nail-biting, kids who had developed one of the habits actually had lower rates of allergies at age 13 than those who hadn't, according to The Washington Post. What's more? The children who sucked their thumbs and bit their nails had the lowest risk of all — and when the participants were tested again at age 32, the results appeared to be consistent with earlier findings.

As the mother of a thumb-sucking daughter, I will admit that, most of the time, all I can imagine when she pops her thumb in her mouth is yet another cold or runny nose that seems to now be a regular part of life with kids. But what the research appears to be showing is that the microbe exposure that sometimes might turn into an illness may also be helping to bolster her immune system in other ways — and, well, that's pretty reassuring.

In fact, experts are beginning to think that our propensity for cleanliness may be part of why allergies are becoming such an issue in the first place. Dr. Scott Sicherer, director at the Jaffe Food Allergy Institute at Mount Sinai Hospital in New York, told CNBC that one theory behind the rise in allergies is that children's immune systems just aren't being exposed to the same amount of germs as in the past, and that it could be why more children are having immune responses to foods that should otherwise be OK, like peanuts, eggs, and dairy.

The rise in the number number of children experiencing potentially life-threatening allergies is one reason why the National Institutes of Health has begun recommending that parents begin introducing peanut-containing foods to infants as "early as 4 to 6 months." Though previous wisdom was that delaying exposure to potential allergens would be protective, it's now thought that the opposite might be true — the earlier a child's immune system is exposed to peanuts, the less likely they may be to develop a deadly allergy.

Unfortunately, it's still far too early to definitively say if semi-icky things like sucking on your kid's pacifier or letting them bite their nails could offer a valuable immune system boost, but at the very least, it no longer seems like an outlandish idea. And given how much work parenting a young child already is, it's a relief, at least, to consider that it's probably just fine if you're not always on top of your cleanliness game.