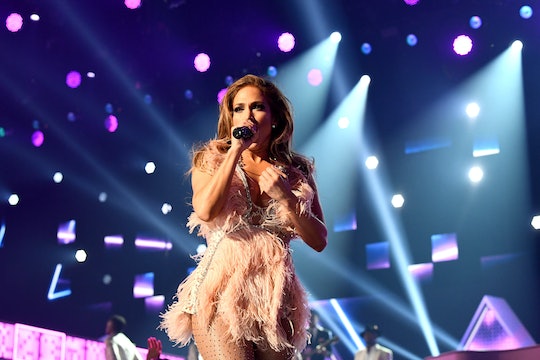 Super Bowl LIV may be a few months away still, but the biggest news about the day has already been revealed. That's right: Super Bowl 2020's halftime performers have been announced and, honestly, it's going to be an amazing night. On Thursday, Sept. 26, it was confirmed that Jennifer Lopez and Shakira, two dynamic artists and badass moms, will be joining each other on stage as this year's Super Bowl halftime performers at Miami's Hard Rock Stadium.

Lopez first teased the news on Twitter, with a photo of a performer that only showed to bottom of her face, who was later revealed to be Shakira. "This is happening. 02.02.20," she tweeted on Thursday. Shakira did the same on her Twitter, teasing a photo of Lopez, writing: "Get ready," adding the world emoji.

Minutes later, the Hustlers actress shared a photo of herself and Shakira standing together. "Going to set the world on [fire,]" she captioned the photo on Twitter, using three fire emojis. The "Hips Don't Lie" singer also confirmed the exciting news on her Twitter, writing: "It doesn’t get any bigger than this! So excited about getting on that #SuperBowlLIV#PepsiHalftime stage!"

Unsurprisingly, people are already very, very excited for whats it's in store on Feb. 2, 2020. "Greatest halftime show of all time is coming queen," one person commented on Twitter. And another accurately stated, "I can not process it yet.... I’m in shock... this is going to be the biggest performance no doubt about that!!! The world is not ready for you two hot divas."

Not only are J. Lo and Shakira, without a doubt, "two hot divas" who will completely dominate this halftime performance, but they also make for an incredibly exciting line-up. They're both fierce moms and iconic Latin pop stars — you just know this is going to be an unforgettable night. A Todd Kaplan, Pepsi’s vice president of marketing, said in a statement to the Associated Press: "These two remarkable artists are setting a new precedent for what this show can become, and we’re confident that this will be an incredible performance for the ages."

For those who need a refresher, Lopez has two children, 11-year-old twins — daughter Emme Maribel and son Maximilian David — whom she shares with her ex-husband, Marc Anthony. Shakira also has two children, 4-year-old son Sasha and 6-year-old Milan, whom she shares with Spanish soccer player Gerard Piqué. Both Shakira and Lopez have dominated charts throughout their careers. And because their tiniest and most adoring fans will be watching and cheering their moms on, you know J. Lo and Shakira are going to put on one epic show.

Not only is this an exciting moment for fans, performing at the Super Bowl has been a dream for Lopez for years. "Ever since I saw Diana Ross fly off into the sky at the halftime show, I dreamed of performing at the Super Bowl," Lopez told ESPN. "And now it's made even more special not only because it's the NFL's 100th anniversary, but also because I am performing with a fellow Latina. I can't wait to show what us girls can do on the world's biggest stage."

I'm not one to making sweeping statements, but I think it's safe to say that J. Lo and Shakira taking the world's biggest stage as co-headliners for the 2020 Super Bowl is exactly what the world needs right now.