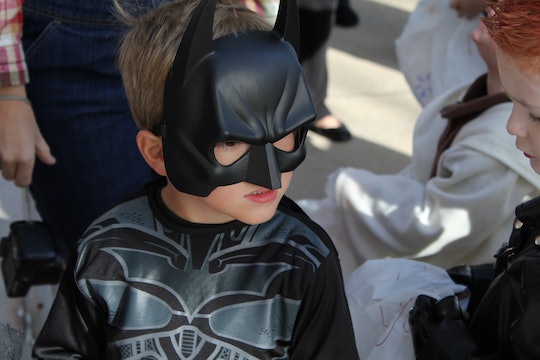 How To Combat Aggressive Superhero Culture

While running around pretending to be your favorite superhero is a happy childhood memory for many of us, they might not have been the best role models after all. New research found that superhero culture might encourage aggressive behaviors in kids, not defensive or brave ones. But does that mean parents should turn off The Bat-Signal forever?

Kids often gravitate toward superheroes because they're the good guys: they fight off the villains and save the day. Not to mention they have really cool costumes. But new research from Brigham Young University wanted to know if kids are actually inspired to display defending behaviors by their heroes.

Looking at the behaviors of preschoolers who were into superheroes, researchers analyzed the kids' behavior for a year as they engaged with superhero culture (which includes stuff like TV shows, films, books, comics, and toys). Researchers found that kids who were into superheroes and regularly partook in the culture were not more likely to display defending behaviors, like standing up for a peer who was being bullied. They were, however, more likely to engage in aggressive behaviors, both socially and physically. Researchers pointed out that especially in younger children, these takeaways might be in part due to the complexity of superhero narratives.

While older kids can grasp the motivations of both the heroes and the villains in superhero stories, younger children tend to take in the action without understanding the do-gooding behind it. It's also worth pointing out that superhero movies and other media aren't generally geared toward preschoolers, even though the characters are often popular with kids.

Researchers conducting the study at Brigham's found that many preschoolers were regularly exposed to superhero media that may not necessarily have been age appropriate. At this age, kids can process the action, which is often violent, but can't parse out the complex morality of the fictional universe that justifies it. What they do register, essentially, is that these characters kick, punch, shoot, and showcase other violent behaviors, which kids are likely to imitate.

Researchers also suggested that there's some desensitization to violence that starts to happen when young kids are exposed to this kind of media, especially when they're so young that they don't really understand the broader concept. Children in the study also associated the violent behaviors with their favorite superheroes, framing the violence in a positive light. Twenty percent of the children in the study said that they liked their favorite superhero because of a violent skill, like "smashing" and "destroying" and even "killing."

Researchers didn't think the answer was to attempt to shield kids from superhero media entirely: it's such a huge part of popular culture that it would be near impossible to do that anyway. But, as with most recommendations regarding media consumption, they do think moderation is important. In today's world there's a definite need for stories where the good guys win, and kids should definitely get to experience that. But it might be a good idea to make sure they're old enough to understand a little more about the nuance of superhero lore before encouraging them to Hulk Smash with abandon. And, as always, sitting down and having a conversation with your kid about why a superhero is cool — not because they "smash" or kill things, but because they save and help people — is always a good call.