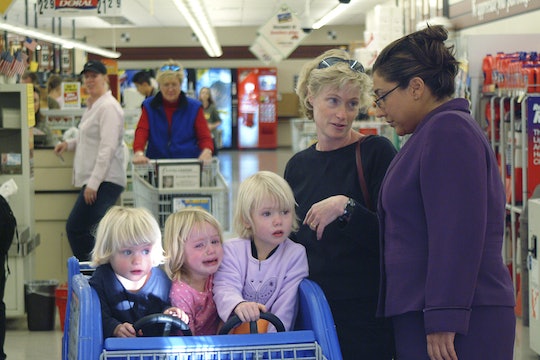 My husband and I used to watch Supernanny every week back in the mid-2000s. We didn't have children, and wouldn't until after the last episode aired, but we knew that we would someday, and so watched with the eager attention of straight-A students taking driver's ed. Just as Anthony Bourdain's No Reservations could give us the vicarious thrill of Vietnamese street food — a trip our non-profit worker salaries would never allow for — Supernanny's Jo Frost gave us not only a glimpse of what family life might be like, but a small taste of what it would be like to have a nanny (another luxury service impossible on our budget). And not just any nanny, a magical, Mary Poppins-like figure from Britain.

Recently rebooted on Lifetime, Supernanny premiered on American TV in 2004, a time when it seemed like reality TV was all that was ever on. Out of the frothing cauldron of that period came nightmares like The Biggest Loser (unofficial slogan: "Hate yourself skinny!"), The Swan ("Do you think you're ugly? You are! Have a boatload of plastic surgery and compete in a beauty pageant!"), There's Something About Miriam (just Google it and cry for a bit).

It wasn't all bad. There was also a spate of what I'll call "feel-good-life-improvement" shows that scrapped competitions and exotic locales all together. Shows like Extreme Home Makeover and Queer Eye For The Straight Guy came to everyday Americans to make some aspect of their lives — home decor, wardrobe, and/or family relationships — better. We watched these shows, whether or not we were, say, a burly man with low self-esteem, stockpiling the tips for theoretical future use. Within this sub-genre was Supernanny, reassuring parents "You have a problem? Let me help you with kindness and practicality."

The premise was simple and consistent: a (usually suburban, middle-class) family is having some sort of problem with their child's behavior and British nanny Jo Frost comes in to teach them strategies to get a better handle on their kids, homes, and lives. Frost is everything most reality-show personalities are not: calm, measured, and kind. She does not scream degrading insults in people's faces and, as far as I can remember, has never put anyone's head between two piece of bread and demanded they call themselves an idiot sandwich. Except for the odd musical sting and edits to paint the children as out-of-control monsters (which surely wouldn't take all that much effort) there were no gimmicks, no bombast. And somehow, in a television landscape that routinely demanded both, Supernanny chugged on for seven seasons.

Like the show itself, Frost's parenting philosophy is based on steady, reasonable consistency. She never claims a silver bullet or some sort of secret to her methods. Rather, her overarching message is one of consistently striking a balance between nurturing and structure. In a 2009 interview with WebMD, Frost outlined her philosophy:

It's about bridging the gap between parents and children, so that we have more of an understanding of their development as they grow. Parenting has changed over the years. For a time it was about good, strong values and parents who weren't complacent to discipline when necessary. But the ability to articulate and express and communicate with children wasn't forthcoming. Then there was an overabundance of emotion and expressing yourself and the values were slipping. I find myself as that metronome in the middle, balancing left and right. I want to make parents more conscious of the parents that they want to be, what choices they're making, and how they want to raise their children.

Flashy, no, but parents don't need flash, they need results, and this practical advice resonated, clearly, even for childfree folks like me and my husband at the time. In Supernanny, was saw raising children as we expected it to be: challenging, sometimes horrible, but ultimately joyful and manageable.

An hour-long episode would take us at least an hour and a half to get through because of how often we would pause it to discuss what was going on. Sometimes it was just to marvel at just how absolutely out of hand the kids were (because we didn't understand yet the truly chaotic nature of even well-behaved children), sometimes to vent frustration ("Why aren't they using Jo's techniques?!" because we didn't yet understand how hard it can be to break a pattern of behavior as a parent), but most of the time it as to strategize what we would do in a particular situation. If our answer matched Frost's advice we'd give ourselves a smug pat on the back. When it didn't we considered ourselves thankfully educated.

I saw that even the best techniques require time and effort — that nothing lasting is accomplished overnight.

But as all actual parents know, hypothetical parents with imaginary children are always perfect. Real parents? Not so much, and we were certainly no exception. Because no amount of actively watching Supernanny can prepare you for 750,000 ways your life changes once you become a parent (or the 9,800 ways it changes again once you have a second child). Somewhere between the diaper blowouts and meltdowns and the two collective hours of sleep you and your partner get in a night, you forget that you're not supposed to give in to temper tantrums or allow more than 30 minutes of screen time a day and, oh crap, you just screamed at your kid when you know you're supposed to get down to their eye level and speak to them in a calm but firm voice. You begin to understand the moms and dads featured on the show who said things like "I know we're not supposed to let our 2-year-old do X, Y, Z, but we don't know how to get out of these bad habits."

But, as it turns out, you can't watch as much Supernanny as I did without some of it sinking in. It didn't keep me from making mistakes, and it didn't magically making parenting easy (OMG, if only) but it gave a set of guidelines, ideas, insights, and encouragement going into situations I otherwise knew very little about — tantrums, picky eating, and getting a kid to stay in bed. I saw that even the best techniques require time and effort — that nothing lasting is accomplished overnight. And even when particular advice didn't work for me, at the very least Supernanny assured me that I wasn't alone in the struggle.

Even today, in the thick of a particularly challenging moment, I'll sometimes hear a charming British woman in the back of my mind, firmly but kindly reminding me that yelling wasn't going to accomplish anything, that kids need clear expectations, and that, sometimes, they act out because they're craving our attention.

Watching Supernanny didn't make me a perfect parent, but it helped me be a better one.

New episodes of Supernanny air on Lifetime, Wednesdays at 10/9c.