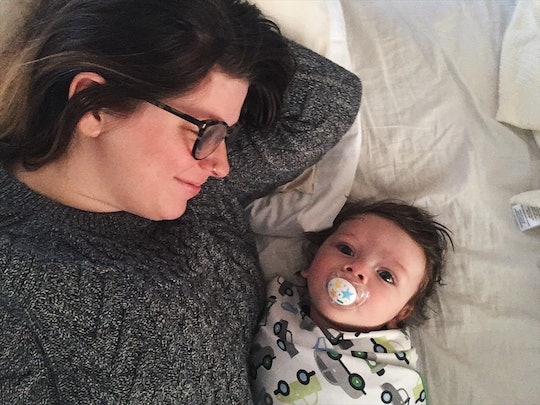 I have three kids, but I haven't exclusively breastfed any of them. My first child nursed with a lot of supplementation until six months, when she switched to formula completely. My second was able to breastfeed until she was 16 months old, but I never would have made it to that point if I hadn’t felt free to supplement with formula when necessary.

I was going to be working from home, which meant that for the first time, I wouldn’t need to pump. I believed that being around my baby the majority of the time was going to be the key to keeping my milk supply healthy, and I was right. After each visit we made to his pediatrician, I was so thrilled to learn that he was nursing well and putting on weight. It felt so good to succeed at breastfeeding.

It wasn’t long, however, before my ability to give my son breast milk and nothing but breast milk became less important to me. I realized that exclusive breastfeeding was a priority for me, but there were other things, like my mental and physical health, that had to come first. Soon I would stop exclusively breastfeeding because I needed my husband to help with my baby, so I could save my sanity.

My first two babies and my experiences breastfeeding them taught me a lot, especially about holding breastfeeding to too high a standard. I believed that breast was best, but when I struggled with my milk supply as a working mom, I was forced to take a closer look at my motivations, and I saw that there was more than one good way to feed a baby. The struggles I faced breastfeeding them taught me that formula was a perfectly acceptable option for our family. Still, there was still a part of me that wanted so badly to feel I had succeeded at breastfeeding. Maybe it was just for bragging rights, or to be able to say that I did. I knew my child would be fine if we needed to supplement with formula, but I also thought I wanted to do whatever it took to avoid it.

I needed less responsibility and I needed the opportunity to take care of myself. Mostly, I needed to get more sleep. That’s when I started tossing around the idea of supplementing.

At first, breastfeeding was so easy for us, but as my son got older, I got further and further behind on sleep. I was nursing him through the night and working a lot during the day, on top of keeping up with my two other kids. I grew more exhausted. I was struggling with postpartum depression and anxiety and quite frankly, I was at the end of my rope.

I needed less responsibility and I needed the opportunity to take care of myself. Mostly, I needed to get more sleep. That’s when I started tossing around the idea of supplementing with formula. Even though my son was healthy and getting chunkier by the day, it was at the expense of my own mental health. My own wellness was suffering. I was lonely because I felt tethered to my house in the evenings due to his frequent breastfeeding.

When I asked my husband what he thought, he was more than supportive. I was worried he would think I was giving up on my goal, but I knew he saw just how exhausted I was and how badly I needed my freedom. I felt sad about it at first and I was worried I would have problems with my milk supply, but those feelings didn't last long. Soon it was clear that, just like my second baby, supplementing with formula while breastfeeding was going to be a really good fit for our family.

I started by easing myself into the idea, sending my son and a can of formula with my big kids when they went to my in-laws once a week. From there, we started introducing it at night so my husband could get up with him for his first feeding around midnight. In the early morning, I kept nursing him. We also started giving him formula occasionally in the evenings. This let me get out with friends without worrying about rushing home or dragging my pump along for a night out.

I have made a lot of sacrifices for my children and I have always been happy to do so, but there came a point when I had to put my needs first if I was going to continue to be a good mom to my kids. Supplementing with formula allowed me to take care of myself.

Supplementing with formula gave me the chance to breathe, which I desperately needed. I have made a lot of sacrifices for my children and I have always been happy to do so, but there came a point when I had to put my needs first if I was going to continue to be a good mom to my kids. Exclusive breastfeeding is great if it works for mom and baby, but it isn’t the most important thing. Supplementing with formula allowed me to take care of myself, which ultimately allowed me the energy to care for my children without resentment or frustration.