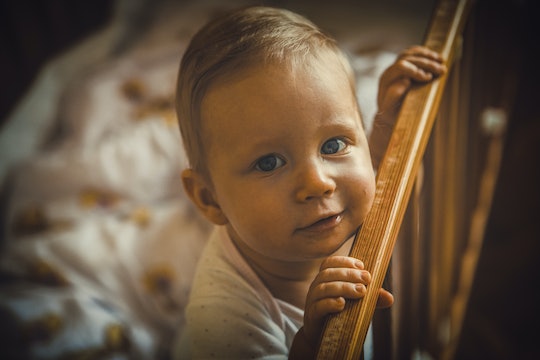 Yes, There Are Sleep Clinics For Babies, & People Are Obsessed

Laying those smiley cloud pillows in the nursery, you never imagine how ominous it will look washed in shades of indigo when you’re holding the baby in the middle of the night, hoping that this time, when you put them down, they’ll stay asleep. The witching hours can be the loneliest. For Aaron and Nicole Jones, both in their thirties, and their daughter Sophie, 1, the breaking point was five and a half months without sleep; that’s when they hired a sleep consultant who devised a strict plan. I was over one afternoon when nap time came: their voices dropped to a hush, and they scurried about flicking all the lights off, pulling a heavy blackout curtain across all the windows, and rumbling a sliding door shut around the crib. We sat in darkness, tuned like bats to Sophie's sleep cycle. “I’ll probably go now,” I whispered. Sleeplessness is devastating for families. Sleep consultants hawk online plans to new parents, or even home consultations, but you are generally alone when it comes time to float their advice in the U.S.

It's a different story in certain corners of that healthcare utopia, Australia, which has a smattering of government-funded sleep clinics. One such place is the Queen Elizabeth II Family Centre (QEII) in Canberra, run by the Canberra Mothercraft Society, Inc. The center runs a five-day-long residential program to address sleep and feeding issues for families with children 0-3 years of age. The clinic is staffed around the clock by specialist midwives, nurses, and counsellors, and families can be referred by their physician for sleep, mood, nutrition, or behavioral issues. Importantly, there is little wait time to be admitted to QEII, says Director of Nursing & Midwifery Mary Kirk by email. Postnatal or early childhood issues are crucial to address, she explains, with 24-hour support over the course of a number of days.

"Our goal is to be redundant, we want the family to able to say that they don’t need us as they have gained the required knowledge and mastered the skills to resolve their issue/s and have the capacity and resilience to continue at home," Kirk says. The learning goes both ways, she says: staff get to know the families, and the families are educated and supported throughout their stay.

Medicare, Australia’s public healthcare service, and all private insurers, cover the full cost of the program at an estimated $5000 so there is no out-of-pocket cost to families. Among locals, it is a famed rite of passage.

The whole time, you're watching your babies for signs of sleep, so when you see that ear pull or whatever, you get a nurse and go through the sleep routine.

“When we went in the first time, I was pretty desperate,” Phan tells Romper. “In the day, he'd do two 30-minute naps, and the night was the same.” Over the course of her stay, she was able to push her son past the 30-minute mark for daytime naps, and learned to distinguish his sleep cues with the help of a midwife. “The whole time, you're watching your babies for signs of sleep, so when you see that ear pull or whatever, you get a nurse and go through the sleep routine,” she explains.

The facility provides all meals, allowing mothers to focus just on their babies. You don’t have to cook or clean, but the experience can be draining, says Phan.

Hayley Fitzpatrick, in her forties, attended QEII for each of her daughters Teagan, 8, and Neve, 6, several years ago, and believes the support provided by the staff is the key. “It’s easy to take the easy way out (put them in bed with you) when you are the only one there and bloody tired,” she tells Romper by Facebook message. QEII is unique among public health services in that you have 24-hour support, and someone there through the wee hours. “At the clinic, you have moral support from non-emotionally involved third parties,” she explains.

We are all told to expect a lack of sleep when we become parents. We expect it, but don’t know how to deal with it. The sleep debt accumulates to six weeks’ worth by the end of the child’s first year, says Dr. Rebecca Kempton, a pediatric sleep specialist in the U.S., and the founder of Baby Sleep Pro. The fog of exhaustion makes it even harder to address your approach to sleep, especially if you believe the “myth” that your child will grow out of their sleep issues, Kempton tells Romper by email. “Falling and staying asleep independently is a biological need and a skill, and like any skill, needs to be learned with guidance and a lot of practice,” she says.

Conflicting, confusing, and contradictory advice leads to parents either doing things that won't work to help their baby sleep, or paralysis.

Kempton cites a statistic that 35 percent of children diagnosed with ADHD are actually sleep deprived. Twenty percent of car crashes are blamed on tired drivers (National Sleep Foundation); a lack of sleep ruins lives, inhibits learning, and increases the risk of depression, among other side effects. So why do we have such a tough time teaching our kids to sleep? “Conflicting, confusing, and contradictory advice leads to parents either doing things that won't work to help their baby sleep, or paralysis,” says Kempton. Put simply, we are lost and don’t know what to do.

Bambie Gamble, who says she is between 25 and 30 years old, sought a referral to QEII after her son N.’s naps dwindled to 30 minutes, even while she was holding him, at 4-and-a-half months of age. Following five days focusing on the “responsive settling” technique, which involves being present at the crib, and patting your baby’s back but not picking them up, she was able to teach her son to self-settle for day naps within three weeks.

We went in with a problem and came out without one, despite everyone saying ‘don’t expect miracles.

The naps also stretched to two hours over time, she tells Romper. “A midwife assigned to me would stand next to me in the cot room, and instructed me what to do based on the crying/cues,” she says. Gamble found the technique difficult at QEII, because “bub wasn’t cooperative,” but success followed at home. During her downtime, she would read books about baby sleep provided by a midwife.

I heard about QEII from my brother, Thomas, who attended with his wife Dilanthi and infant daughter A., then 10-months-old, and says, “We went in with a problem and came out without one, despite everyone saying ‘don’t expect miracles.’” In researching similar programs in the U.S., I came up dry. There are regional hospitals that specialize in sleep diagnostics via a day or night study, but nothing holistic that caters to the family unit.

It’s worth noting that the mothers interviewed for this article all attended the five-day program at ages that would have seen them back at work, had they been covered by a typical U.S. maternity leave policy. Mothers are generally instructed to wait out the "fourth trimester" — the first 12 weeks of their children's lives — before attempting sleep training. The fourth trimester coincides with the cessation of unpaid leave made available through the the U.S.. Family Medical Leave Act.

The QEII program is also designed to address feeding issues, which are so often entwined with sleep and attachment issues. Says Gamble, “I only sought advice from a night duty midwife once when bub was sleeping for over 6-7 hours and I needed to get him up to feed, as I was very engorged, and he would have been due for a feed any time then.”

You have someone standing there saying what to do and it makes you feel better when you’re entering that second hour.

The clinic's sleep-training philosophy takes into account the needs and wants of the family — although that stops short of cry-it-out. The "responsive settling" technique the clinic uses is sometimes referred to as Tresillion, but staff also reference Safe Sleep Space by Helen Stevens for in-patients. Kirk says the clinic uses attachment theory in everything they do with families.

For Phan, the center was crucial in helping draw a line between her husband’s history of sleep walking, sleep talking and night terrors, and her son’s issues. At the time, she looked for an external explanation for his inability to string together a solid night’s sleep. “My approach back then was that something was wrong, there's a food allergy," she says. "Now he's 2, he can tell me that he’s tired and needs to go to sleep, but can't.”

There was no silver bullet, she says, for solving his sleep problems, but at QEII, “You have someone standing there saying what do do and it makes you feel better when you’re entering that second hour.” One night, she recalls the nurse standing with her for two hours patting S.’s back.

The alternative at the time was paying $1200 for a sleep consultant. The family suites have a queen-size bed, en suite bathroom with shower, and baby room adjacent the main chamber. Patients can schedule a therapeutic massage during their stay (an out-of-pocket cost) while the staff look after their child. The meals are healthy and generous. Families spend time learning about sleep and attachment with peers at the information sessions.

But perhaps most radical of all the selling points is simply the fact that the government has made such a big investment in helping families get to know their babies, and form strong attachments.

The breaking point was what age was ‘safe’ to sleep train. But I think we needed some sort of help sooner than that.

Left unaddressed, sleep problems sometimes resolve, and families can stumble through, sometimes without lingering issues. But those early days present a huge opportunity for child and parent alike, writes Kirk. "What we are talking about is primary health care and healthy attachment. A child who is securely attached to its primary carers and gets its needs met at a young age is most likely to be a resilient, contributing adult at 25." I'm struck by the familiarity of the middle-of-the-night comment boards used by American moms when they're clueless how to help their children sleep. What of their attachment?

My friend Aaron, of the blackout shutters, is from Canberra, Australia; had he not been living in New York when his daughter was born, QEII would have been available to him, free of charge.

In his family’s case, the sleep issues resulted in him quitting his job after his employer denied him the flexibility to provide more support for his wife and child. “The company wasn't willing to bend on unpaid paternity leave. I had to take it all in a row or not at all,” he says by email. “The breaking point was what age was ‘safe’ to sleep train. But I think we needed some sort of help sooner than that.”

Today, he and his wife Nicole have relocated to Canada with their daughter Sophie to be nearer family.

For Fitzpatrick, “Those long lonely night patting babies back to sleep seem like forever ago now.” Her children are in elementary school and sleep well. “There’s a light at the end of the tunnel,” she says.

More Like This
Here's When Your Baby Might Start Sleeping Through The Night For Real
These 4 Sleeping Positions Will Keep You Comfortable After A C-Section
Here’s What You Need To Know About That Viral 1960s Baby Formula “Recipe”
Should You Be Giving Your Toddler Melatonin To Help Them Sleep?