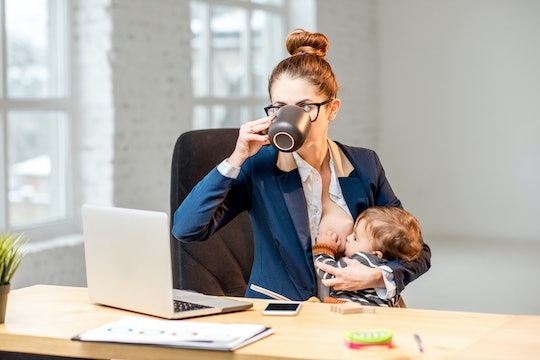 It's no surprise that having a support system helps make breastfeeding more feasible. While often described as "natural," breastfeeding is not always easy. Having people to cheer you on through the tough patches can go a long way. Not all support systems are created equal, though. Supporting your breastfeeding coworkers is key to their success, according to a recent study. Coworkers who encourage their peers are potentially more important to a mom's breastfeeding journey than friends or even supportive partners.

Just how do coworkers come into play? It all has to do with perception and how women view their ability to breastfeed. Researchers out of Michigan State University and Texas Christian University found that the more support women receive from their colleagues, the more capable of breastfeeding they feel. Friends and family members are also important into this way, but not to the extent of co-worker support, according to Science Daily.

The study, which was published in the journal Health Communication, is the first of its kind to look at how female coworkers impact their colleagues' breastfeeding success. Joanne Goldbort, an assistant professor in the College of Nursing at MSU and co-author of the study said in a statement that verbal encouragement helped moms to successfully pump at work, thus keeping their milk supply up.

Lead author of the study, Jie Zhuang, told Science Daily that while many people assume that women are always encouraging of their breastfeeding peers, this isn't always the case. Out of 500 working mothers surveyed by Zhuang and her team, 81 of them indicated they had never breastfed, and 80 had stopped before returning to work, according to Futurity. Of those who did continue breastfeeding after returning to work, less than half continued to breastfeed to the six month point, as recommended by the World Health Organization.

Researchers did not examine the reasons given for stopping, but they question participants on their thoughts and feelings about breastfeeding, as well as co-worker perception and comfort levels concerning pumping milk at work. More than 25 percent of the women who chose to breastfeed reported doing so because of the environment created for them at work, Science Daily reported. Steps taken by employers to facilitate breastfeeding, such as providing a place to pump, were listed as motivators. Additionally, about 15 percent of them told researchers that they opted to continue breastfeeding after returning to work because coworkers encouraged them to do so.

Along with coworkers, friends and family members can also help moms reach their breastfeeding goals. Partners and fathers, in particular, can be of great help. Another study published in the International Breastfeeding Journal found that when partners offer verbal encouragement or actively involve themselves in breastfeeding activities mothers feel more capable and confident about breastfeeding. Conversely, mothers with ambivalent partners, those who are simply interested in "what's best for baby," or those who provide negative feedback feel less confident in their abilities. Parents recommends that dads involve themselves in a variety of ways. From bringing baby to mom when it's time to eat, to burping baby and providing the occasional bottle, there is a lot that dad can do.

The people in a mom's life aren't the only sources of support, though. March of Dimes recommended that moms involve their healthcare providers and seek the assistance of lactation consultants and breastfeeding support groups as well. All of these people in a mom's life contribute to her success, but Zhuang's research indicates that coworkers might be most influential for a working mom.

Goldbort explained to Futurity that it could possibly come down to the amount of time that moms spend with their coworkers:

One factor could be that simply spending the majority of their time during the day with co-workers necessitates more support for breastfeeding success. In the workplace, a breastfeeding woman's dependence on this is higher because she has to work collegially with co-workers, gain their support to assist with the times she's away from her desk, and ultimately try to lessen the 'you get a break and I don't' stigma.

The team's findings should urge women to support one another in breastfeeding if that is a goal. As Goldbort said, "It takes a village to breastfeed a baby."