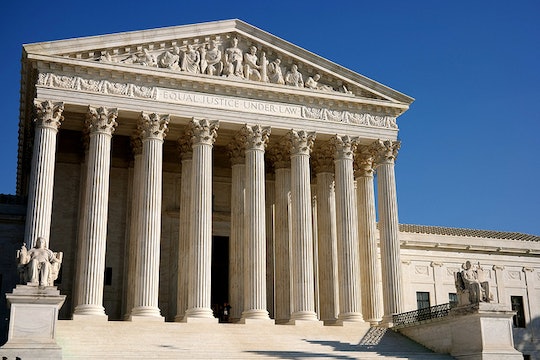 Same sex partners who adopt a child can't be stripped of their parental rights by moving to another state, the Supreme Court ruled Monday in a unanimous decision. The Supreme Court ruled Alabama must recognize a lesbian adoption that took place in Georgia when one woman adopted the biological children of her partner, according to Buzzfeed News. The two women, identified only by initials in court documents, engaged in what 30 states in the U.S. recognize as a "second parent" adoption between same-sex couples.

E.L. gave birth to three kids through artificial insemination, whom her lesbian partner, V.L. subsequently adopted under a temporary residency in Georgia, a state which will grant same sex adoptions, according to AL.com. The two, who live permanently in Alabama, a state that doesn't recognize same-sex adoptions, later split, and E.L. argued successfully before the Alabama Supreme Court that the Georgia adoption wasn't "entitled to full faith and credit" from Alabama.

The ruling had broad implications for any same-sex couple who moved from a state that recognized their parental rights to one that doesn't. V.L. appealed the Alabama decision to the U.S. Supreme Court, which opted to weigh in on the question: Can same-sex couples have a legal adoption invalidated if they move to another state?

The Supreme Court spoke loudly today in a unanimous ruling that no, in fact, Alabama needs to recognize, and enforce, the couple's Georgia adoption, reversing the Alabama Supreme Court decision.

"A state may not disregard the judgment of a sister state because it disagrees with the reasoning underlying the judgment or deems it to be wrong on the merits," the ruling said.

This is a victory for the estimated 65,000 children who live with a gay or lesbian parent, according to USA Today. We also live in a country with more than 400,000 children in foster care. It's not surprising the SCOTUS wouldn't support removing children from their parents simply because of where in the U.S. they happen to relocate. It's a notion so ridiculous that there wasn't a single dissenting opinion on the matter.

The decision has implications for circumstances beyond child custody disputes, though. What if one parent in a same-sex couple dies or becomes incapacitated? Could their children be separated from the other parent simply because of a legal loophole? The Supreme Court said nope.

This ruling is a victory for LGBTQ families across the country who can now breathe a sigh of relief that their children and family will be protected no matter where in the U.S. they happen to live.

And that's a beautiful thing.