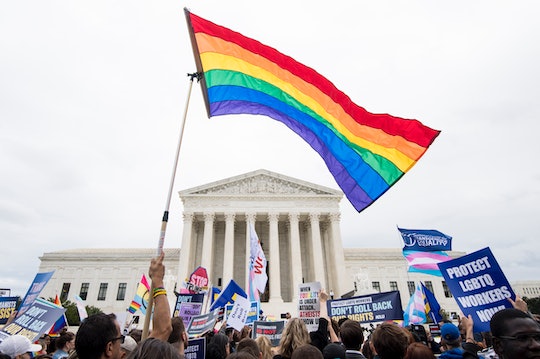 In a 6-3 decision handed down Monday, the U.S. Supreme Court ruled LGBTQ workers are protected from discrimination in the workplace under the 1964 Civil Rights Act. The court's landmark decision effectively extends discrimination protections to the more than 11 million people who identify as lesbian, gay, bisexual, transgender, and/or queer and makes it illegal for employers to fire an individual because of their sexual orientation or gender identity.

"An employer who fires an individual merely for being gay or transgender violates Title VII," the court's ruling read. Title VII of the Civil Rights Act of 1964 prohibits workplace or employment discrimination on the basis of race, skin color, religion, sex, and national origin. Specifically it states that it is unlawful "for an employer to fail or refuse to hire or to discharge any individual, or otherwise to discriminate against any individual with respect to [their] compensation, terms, conditions, or privileges of employment, because of such individual's race, color, religion, sex, or national origin."

While some, including the Trump administration, have argued the federal law's protections against discrimination based on sex did not extend to include sexual orientation and gender identity, the Supreme Court's Monday ruling ended debate around the topic with a major victory for the LGBTQ community. Conservative justices Chief Justice John Roberts and Neil Gorsuch joined the court's four liberal justices to issue the court's majority opinion, which was written by Gorsuch.

"An employer who fires an individual for being homosexual or transgender fires that person for traits of actions it would not have questioned in members of a different sex," Gorsuch wrote in the majority opinion. "Sex plays a necessary and undiguisable role in the decision, exactly what Title VII forbids,

Gorsuch went on to acknowledge that the lawmakers who'd enacted the Civil Rights Act likely did not anticipate it would one day be used in this particular way. "But the limits of the drafters’ imagination supply no reason to ignore the law’s demands," he wrote. "Only the written word is the law, and all persons are entitled to its benefit."

Monday's ruling is the result of a handful of legal cases brought forth by gay and transgender employees. They include Gerald Bostock, a Georgia child welfare services coordinator who was fired in 2013 after his employer learned he'd joined a gay softball league outside of work, Donald Zarda, a skydiving instructor in New York who was fired in 2010 after he revealed he was gay, and Aimee Stephens, a transgender funeral director who was fired after revealing her plans to transition to her employer.

While both Zarda and Stephens died before the Supreme Court reached a verdict in their case, Bostock told ABC News he was "elated." "There are truly no words to describe just how elated I am," Bostock said. "When I was fired seven years ago, I was devastated. But this fight became about so much more than me. I am sincerely grateful to the Supreme Court, my attorneys, the ACLU, and every person who supported me on this journey. Today, we can go to work without the fear of being fired for who we are and who we love."