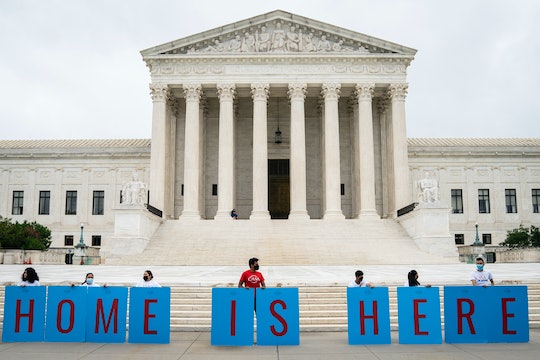 In a ruling handed down Thursday, the U.S. Supreme Court rejected the Trump administrations' attempt to dismantle the Deferred Action for Childhood Arrivals program, otherwise known as DACA. The Obama-era program protects undocumented immigrants who were brought into the country as children from deportation. But while the Supreme Court's DACA ruling represents a major win for Dreamers, it's not the end of their battle.

"We conclude that the Acting Secretary [of Homeland Security] did violate the [Administrative Procedures Act (APA)] and that the rescission [of DACA] must be vacated," Chief Justice John Roberts, who served as the swing vote in the court's 5-4 decision, wrote in the majority opinion. Roberts went on to characterize the Department of Homeland Security's decision to rescind DACA as "arbitrary and capricious under the APA."

Ultimately, the court sided with lower courts in concluding the Trump administration had failed to properly follow legally required procedures when ending the program and had clearly not weighed the effect ending the program would have. "We address only whether the DHS complied with the procedural requirement that it provide a reasoned explanation for its action," Roberts wrote. "Here the agency failed to consider the conspicuous issues of whether to retain forbearance and what if anything to do about the hardship to DACA recipients. That dual failure raises doubts about whether the agency appreciated the scope of its discretion or exercised that discretion in a reasonable manner."

Former President Barack Obama cheered the court's ruling Thursday, saying he was happy for the more than 690,000 DACA recipients it gave a lifeline to. "Eight years ago this week, we protected young people who were raised as part of our American family from deportation," Obama said in a statement shared over Twitter. "Today, I'm happy for them, their families, and all of us. We may look different and come from everywhere, but what makes us American are our shared ideals."

While news of Thursday's ruling was applauded by a number of advocacy and immigration organizations, many also stressed the importance of Congressional action. "[This] decision means that 800,000 youth brought to this country as children will — for now — be spared the pain of having their lives and families torn apart," Bruce Lesley, president of the bipartisan advocacy organization First Focus on Children said in a statement shared with Romper. "However, to truly safeguard their well-being Congress must pass a permanent solution."

As Roberts noted in the court's majority opinion, the dispute brought before the Supreme Court didn't pertain to whether or not the Trump administration could rescind DACA. In fact, Roberts made it clear that "all parties agreed that it may." Instead, Roberts said the case centered on how the DHS had attempted to shut down the program, effectively giving the Trump administration a green light to try and end DACA again using different reasoning and procedures.

"We do not decide whether DACA or its rescission are sound policies," Roberts wrote. "'The wisdom' of those decisions 'is none of our concern.' We address only whether the agency complied with the procedural requirement that it provide a reasoned explanation for its action." He went on to note that, "the appropriate recourse is therefore to remand to DHS so that it may reconsider the problem anew."

While it's unclear if the Trump administration will move to renew its controversial efforts to end the widely-supported DACA program ahead of November's presidential election, the president has appeared to suggest he might be up to the task. "As President of the United States, I am asking for a legal solution on DACA, not a political one, consistent with the rule of law," President Donald Trump tweeted Thursday. "The Supreme Court is not willing to give us one, so now we have to start this process all over again." He then claimed the court's DACA ruling "gives the President of the United States far more power than EVER anticipated."

In earlier tweets, Trump declared the Supreme Court's recent rulings to be "horrible & politically charged" and asked if others got the impression the court didn't "like" him.