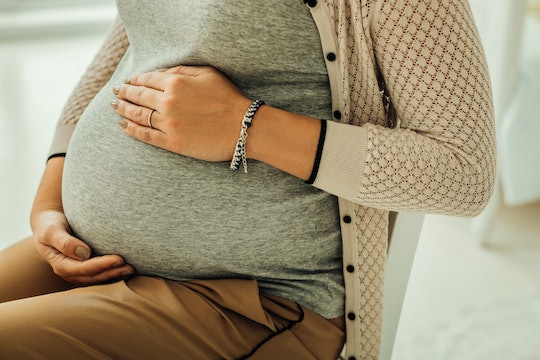 Surgeon General Issues New Warning On Marijuana Use During Pregnancy

Amid reports that marijuana use among pregnant women has increased, the surgeon general released a new advisory Thursday, cautioning both pregnant women and teenagers from using the drug. Although more states have legalized or decriminalized marijuana use in recent years, the surgeon general warned against mixing marijuana and pregnancy, noting that the drug today is stronger than it previously was and use of it while expecting could negatively impact brain development.

"While the perceived harm of marijuana is decreasing ... the scary truth is that the actual potential for harm is increasing," Surgeon General Jerome Adams said Thursday in a press conference revealing the new advisory. "Not enough people know that today's marijuana is far more potent than in days past."

"This ain’t your mother’s marijuana," he continued.

Adams cautioned that recent studies had found marijuana use among pregnant women to be increasing as some dispensaries moved to market the drug as a treatment for morning sickness. In a recently released national survey, for example, self-reported use of medical and non-medical cannabis use among pregnant women rose from 3.4 percent to 7 percent between 2002 and 2017. A study conducted in California and released in 2017, also found that marijuana use among adult pregnant women increased from 2.4 percent to 3.9 percent from 2002 to 2014. In roughly that same period of time, 14.6 percent of pregnant adolescents self-reported having used the drug within the last month.

"In pregnant women, marijuana is now actually the most commonly used illicit drug," Adams said Thursday. "No amount of marijuana use during pregnancy or adolescence is safe."

The advisory released by the surgeon general on Thursday cautioned that "marijuana use during pregnancy can affect the developing fetus" and may be associated with adverse birth outcomes such as low birth weight. Specifically, the surgeon general warned that the THC found in marijuana "can enter the fetal brain from the mother's bloodstream and may disrupt the endocannabinoid system, which is important for a healthy pregnancy and fetal brain development."

While marijuana, or specifically a component of the drug known as CBD, has been found to successfully treat pain, anxiety, insomnia, epilepsy, and more, the surgeon general isn't the only one warning against marijuana use during pregnancy. March of Dimes, a nonprofit committed to mothers and babies' health, cautions that "using marijuana during pregnancy may cause problems for your baby, like premature birth, problems with brain development and stillbirth."

The American College of Obstetricians and Gynecologist also recommends pregnant women steer clear of marijuana use, medical or otherwise. "When marijuana is smoked or eaten, the chemicals reach the fetus by crossing the placenta," the organization noted in a 2018 advisory. "Research is limited on the harms of marijuana use during pregnancy. But there are possible risks of marijuana use, including babies that are smaller at birth and stillbirth."

Speaking from Washington, D.C. on Thursday, Adams said his most recent advisory was meant to be a response to the recent rise of marijuana use reported among teens and pregnant women. "Recent increases in access to marijuana and in its potency, along with misperceptions of its safety endanger our most precious resource: our nation's youth," he said.