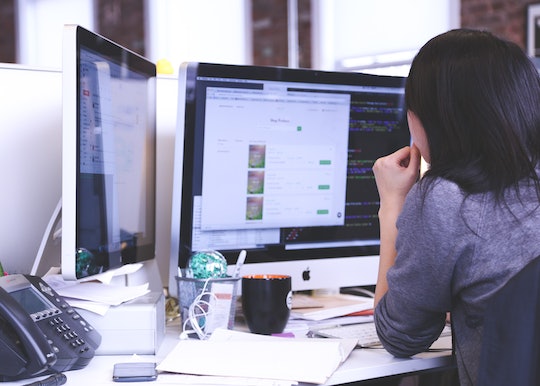 There's no doubt that the average woman will face more difficulties in the workplace than the average man does. Unfortunately, mothers in the workplace tend to face even more challenges, and are less likely to be hired, to be seen as competent, or to be paid fairly compared to a man with children. But a new report on women in the workplace, conducted this year by McKinsey and Lean In, has revealed some surprising new findings that affect working mothers.

Thanks to a gender wage gap that sees women's pay lag behind men's, policies that disproportionately affect mothers, and biases that work against women, the fact that gender inequality exists in American workplaces is no surprise. But Lean In and McKinsey wanted to dive deeper into the state of women in corporate America, so they studied 132 companies' pipeline data and HR practices (which affect a whopping 4.6 million employees) and surveyed 34,000 employees. Then, they crunched the data.

"The study is, to our knowledge, the most comprehensive annual review of women in corporate America," Sheryl Sandberg, founder and board chair of Lean In, wrote in The Wall Street Journal. "Last year’s report concluded that we were 100 years away from gender equality in the C-suite. A year later, we’re not much closer—and that is not just bad for women, it’s bad for our companies and our economy."

Here's a few key takeaways from the study:

A common explanation given for the fact that women don't climb the corporate ladder is that women want more work-life balance than men do: they want to (or are expected to be) be mothers first, employees second.

As author Lauren Groff told The New Yorker in May:

The questions I get most at readings or in interviews are about being a mother and writer. We’re not allowed our achievements without first denigrating ourselves or saying, with a sigh, 'Yes, that’s correct, I’m a writer and a mother, and it’s so hard, and, no, I don’t do it well.'

As it turns out, women are less interested in becoming top executives than men are (only 40 percent of women want an executive role, while 56 percent of men want the same) — but it has nothing to do with kids. Women and men reportedly worry equally about balancing work and family life, so that's not the cause. Instead, as the report explains,

Women with and without children are far more likely to say they don’t want the pressure, suggesting they expect to face more challenges or are doing a different cost-benefit analysis. Women anticipate a steeper path to the top.

People Who Do More Housework Are Less Interested In Executive Roles

According to Bloomberg, women make up nearly half the workforce, and in 40 percent of households with children, women are the primary or sole breadwinners of the family. And yet, they're still doing more housework and child care than men at every single stage of their careers.

There's good news and bad news when it comes to employers' work-life balance programs. On the bright side, over 66 percent of companies offer employees programs that allow them to balance family and work, such as part-time work and leaves of absence, and most employees think these programs are effective.

On the negative side, there are less programs geared towards helping parents (think childcare subsidies and extended leave), and even when it comes to regular programs, less than a quarter of employees are actually taking advantage of them. The general consensus from employees seems to be that taking advantage of those flexible work options isn't supported by higher-ups, and most employees are afraid of being penalized for having a healthy work-life balance. Sandberg wrote in The Wall Street Journal:

These things matter. Not just for women, but for us all. Research shows that gender equality is as good for business as it is for individuals. Diverse teams and companies produce better results and higher revenue and profits, which lead to more opportunity for everyone, not just women.

So, for the good of women everywhere: share Lean In's findings with men and women in your life and at work. Teach your daughters how to negotiate. Advocate for yourself. And for God's sake, pass the broom to a man in your life every once in a while.