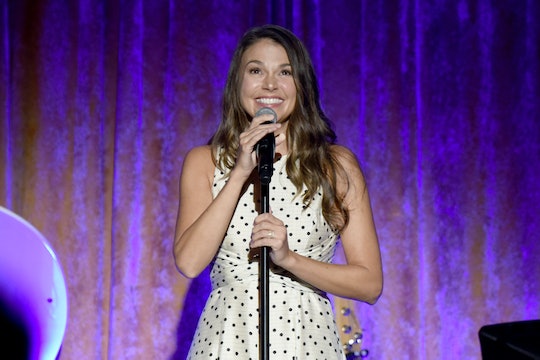 Sutton Foster's Daughter Has A Preference For Her 'Younger' Love Interest

On the TV show, Younger, people have watched Sutton Foster's character, Liza, bounce between love interests, Josh and Charles over the past five seasons of the show. But leave it to Foster's 2-year-old daughter, Emily, to make up her mind for the actress. According to a new Instagram post, Sutton Foster's daughter has a preference for her Younger love interest, which might have some fans surprised.

The filming for the newest season of Younger is officially under way (thank goodness), which means the actors from the show are spending a lot of time on set. And since Foster is the mom to a young daughter, it makes sense that she would be taking her daughter to work with her. On Instagram, Foster has documented Emily paying a visit to the wardrobe department, spending some time in hair and makeup, and hanging out on set. It seems like Emily is pretty much taking over for her mom and making decisions for her now, too.

In a new Instagram post, Foster revealed that her daughter is getting along famously with one of her costars, Nico Tortella, who plays Josh, Liza's sometimes-love-interest on the show. In the video, Tortella and Emily can be seen adorably stomping their feet together while Foster sings.

"I think Em might be #teamJosh," Foster captioned the video.

The entire video is absolutely adorable and will pretty much put you on #TeamJosh, just like Emily (if you weren't there already). Especially after you see the way he interacts with her daughter.

While Emily might prefer Josh, Foster's character might disagree. After ending up in a love triangle between Josh and Charles on Younger over the past five seasons, Foster's character finally made up her mind in the Season 5 finale. During the Season 5 finale in August, Liza — spoiler alert — decided to make her relationship official with her boss, Charles, according to the New York Times. But things quickly changed when they realized they couldn't be together because he is her boss.

This leaves things open for season six, according to the New York Times. And who knows? Maybe Foster is going to listen to her daughter and finally settle down with Josh. But no one will know for sure until the sixth season of Younger airs on Paramount Network sometime later this year.

And hopefully Foster brings her daughter around more on set, because their adventures have looked like so much fun.

Just like Foster has been sharing bits of her life on set this week, she has also been open to sharing her journey to welcoming Emily into her life. Foster, who is 43, adopted Emily with her husband, Ted Griffin, after struggling with infertility, according to PopSugar. Foster told PopSugar in March:

We wanted a family so badly. We met with our lawyer, and we got so much information. Our experience was so positive. IVF and fertility were fraught with so many challenges...our pursuit of adoption just felt right.

And Foster could clearly not be any happier to be a mother to such a sweet little girl, especially since Foster told People in July 2018 that she felt like she was meant to be a part of their lives.

"It doesn't matter where she came from, my belly or someone else's belly," Foster said. "When she was born, I was like, 'What took me so long?' And I realized I was waiting for her to come into my life."

Hopefully, Foster never stops sharing her journey with Emily with the rest of the world — from her adoption story to pictures of her on the set of Younger.