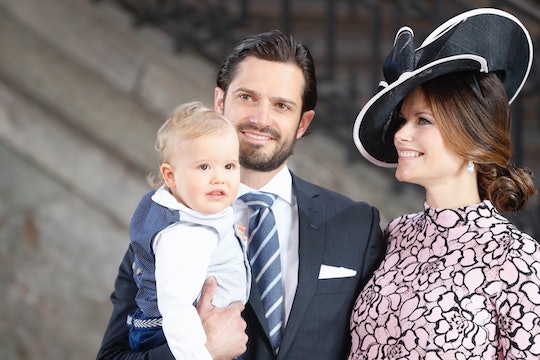 As royal watchers enjoy the news from London...Meghan's bump...Kate and William's first Christmas as a family of five...it can be easy to forget that there are other gorgeous and interesting royal families out there to follow, too. But Sweden's Prince Carl Philip and 2-year-old Prince Alexander accepted Christmas trees at the palace and it pretty much couldn't be cuter, so it may be time to take notice, if you haven't already.

As People reported, Sweden's Prince Carl Philip had an ultra-cute moment recently when he welcomed the Christmas season with son Prince Alexander, 2.

Alexander, adorably attired in red pants, a festive winter sweater, and a Santa hat, helped his dad greet the season by welcoming the donation of Christmas trees at the Royal Palace of Stockholm on Monday. The palace has been gifted with evergreen from the nearby Swedish University of Agricultural Sciences every year since the late 1960s, the magazine noted.

With Sweden having been presided over by the same monarch for the last 45 years, King Carl XVI Gustaf, as E! News outlined earlier this year, the country's ruling family bears a sort of resemblance to the British royals. First off, they've got stability in the form of a long-standing King, much as England has Elizabeth, the long-reigning queen.

And just as with William, Harry, their wives, and the royal kids, King Carl and wife Queen Silvia's kids are all grown up, fabulously stylish, and having beautiful families all their own, as the Swedish Royal Court's official Instagram account shows.

Carl Philip, fourth in line for the throne after his sister, Crown Princess Victoria and her children, Princess Estelle and Prince Oscar, married Princess Sofia, a former model, in 2015, according to Town & Country magazine. The gorgeous pair are parents to adorable Alexander, of course, and his younger brother, Prince Gabriel, 1, People confirmed. Prince Gabriel wasn't on-hand (at least, not on camera) to receive this year's Christmas trees, but his older brother basically stole the show.

The accepting of the Christmas trees tradition may not be as ancient as some, but all traditions have to start someone, don't they? And with little ones around, the tradition is way more cute than it would otherwise be, so here's hoping for additional royal kids at next year's event.

The Swedish royals also kick off the holiday season early, with a celebration of St. Lucia Day, an homage to a Christian martyr that includes costumes for the kids such as white gowns and festive hats, on Dec. 13, as noted by Town & Country.

Now that I know a little more about this photogenic and fabulous family, it will be fun to watch out for updates about them. I say, the more royals to know about, the better.