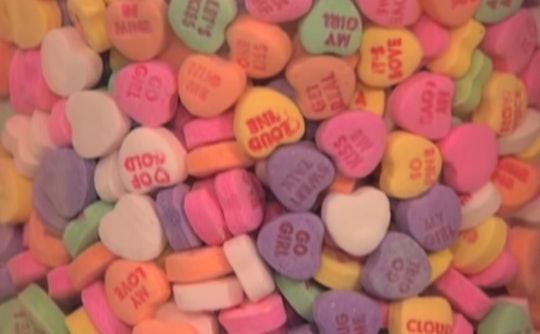 There are some candies that go hand in hand with a holiday — candy canes for Christmas, candy corn for Halloween, Peeps for Easter, and, of course, candy conversation hearts for Valentine's Day. But, fans of the latter are going to be out of luck this Feb. 14, as the candy maker announced a startling hiatus for the iconic confection. Sweethearts candy won't be sold in stores for Valentine's Day 2019, but will be back in the future.

Those famous pastel hearts with sassy sayings like kiss me, puppy love and most recently text me, will be missing from aisles and won't return until 2020 when the company issues a relaunch, according to Click Orlando.

Sweethearts can be purchased online, although you might not be able to vouch for the freshness because they are definitely last year's batch. And the prices are steep. As of publishing, they were available on Amazon, eBay and a few other retailers for nearly double or triple their original prices.

Brach's Candy does sell its own version of the candy, know as Conversation Hearts but they don't seem to taste the same or hold the same sentimental value, according to a review by candy blog SugarPressure.

If you're looking for another alternative, Sour Patch Kids just came out with its own version as well, according to Better Homes & Gardens. These have much more up-to-date sayings on them like, yas, bae, and ovr it.

As suspected, fans of the candy and Valentine's Day in general, are just plain depressed over the lack of traditional Sweethearts. "Sad. They r such a tradition to millions," said one fan. And this guy is not happy about his forced diet, either.

And while some fans never ate them, they just want them back for nostalgia purposes.

Spangler Candy Company purchased the NECCO Company, maker of Sweethearts, after it went out of business in July 2018, USA Today reported. And since there was only five months between the purchase of the company and Valentine's Day, there simply wasn't enough time to produce the amount of Sweethearts needed, according to USA Today.

Apparently, 8 billion Sweethearts are needed to fill demands, and they're generally sold six weeks before Valentine's Day, according to the CandyStore.com.

They're also the most popular Valentine's Day candy, accounting for $1.8 million in sales, the CandyStore.com added. Chocolate candies inside heart-shaped boxes followed close behind them. But don't worry about that — those candies will be in plentiful supply.

"Sweethearts and Necco Wafers are iconic brands with rich hundred-year-plus histories," Kirk Vashaw, the chairman and CEO of Spangler said, according to ABC's Los Angeles affiliate. "We are particularly excited about the Sweethearts brand. Many people have memories of sorting through their box of Sweethearts to find just the right message to share."

NECCO operated for well over 100 years before its fold, as USA Today reported, and also made such classic candies as NECCO Wafers, Mary Janes, and Clark bars.

Sweethearts were first introduced to consumers in 1866, but NECCO started making them in 1901, according to Better Homes & Gardens.

So if you were hoping to get your Valentine's Day message across with the help of a tiny sugary heart, you're out of luck. Here's hoping everyone says what's actually in their own heart, out loud, to the ones they love come Feb. 14. Otherwise, you'll just have to wait until 2020 to do it in candy form.