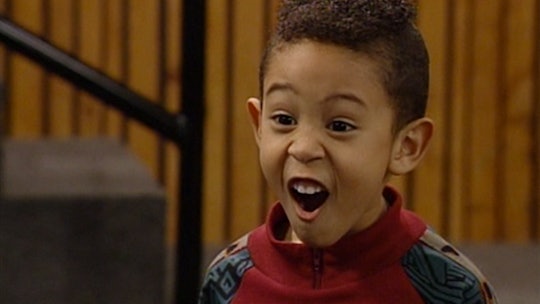 For Disney Channel fans of a certain age like myself, Tahj Mowry is synonymous with the show Smart Guy, in which he played a pre-teen genius, or the movie Seventeen Again (an absolute classic of the TV movie genre) with his sisters, Tia and Tamera. He also had a recurring role on Full House and guest spots on Friends. Oh, and he was also the original voice of Wade on Kim Possible, which now has a live-action original movie reboot of its own. So it's understandable if you don't recognize the now 32-year-old regulation hottie as the adorable pip squeak he was during his Disney days.

Talking to Mowry on the phone — who got his first taste of the spotlight at the ripe old age of 4 years old acting alongside Patti LaBelle and Vivica Fox in Out All Night — he is disarmingly friendly and, well, normal. He attributes his relative normal-ness to the fact that even though he spent his middle school years all over your TV, he also went to regular middle school. And no, he wasn't always the most popular kid on campus. (I mean, at least not until he got to high school.)

"In middle school, I was just this, you know, short actor kid. People saw me on TV and I would sometimes be in school and then sometimes I wouldn’t be in school." He continues, laughing, "they didn't really like me in those years. Because they were all, 'He only comes to school when he wants to.'" Luckily for Mowry, he says his social life gained steam once he got a little older.

Perhaps part of this is because acting took a back seat in those years. Mowry explains that while he was in high school he really only did voiceover work for Kim Possible instead of being on screen because he wanted a normal life. Then again, he also tells me that considering he's been acting since he was barely out of diapers — working all the time pretty much is normal for him. He says, "I didn’t think it was weird or anything. I mean, it was just, you know, my job and it was what I wanted to do."

Of course on those Disney Channel movies and shows Mowry also sometimes got to work with his equally busy (and might I add, equally delightful) sisters, Tia and Tamera. They made an appearance on Smart Guy and he showed up on their show, Sister, Sister. I ask if this was ever difficult — thinking of when I try to work with my siblings on anything at all — and it turns out his experiences are way different than mine.

"It’s kind of funny cause it’s not really work when we work together," he tells me, calling it a "treat." He goes on, "It's just like hanging out with your family, really."

The Mowrys are all clearly super close with each other, which just gives me all the warm and fuzzies. Can I be a part of this family, please? I'll totally bring a casserole to the next family gathering.

Mowry also teases that he's not opposed to a sequel to Seventeen Again, which he starred in alongside both sisters (and which came out years before the Zach Efron movie of the same name). Personally, I've been waiting patiently for this movie for over 15 years now, so I think it's time to make it happen.

As for Mowry's adult acting life? Well, you've maybe watched him on the adorable sitcom Baby Daddy on Freeform, about a guy whose one-night-stand leaves a baby on his doorstep one day — hijinks ensue. The show finished its six season run in 2017, and since then Mowry has stayed busy. He tells me he filmed an independent movie in the beginning of the year called Welcome Matt, in which Mowry pivots from comedy to a slightly darker, and definitely more dramatic role.

"I play somebody who went through a traumatic experience, so he has agoraphobia so he can't leave his home," he tells me. Definitely a far cry from a multi-cam sitcom. He also teases that he's finishing up writing a screenplay of his own at the moment — a psychological horror movie — but he won't spill anymore details to me.

OK, by now you've probably all figured out that I kind of have a crush on Tahj Mowry now. But I mean... don't you?