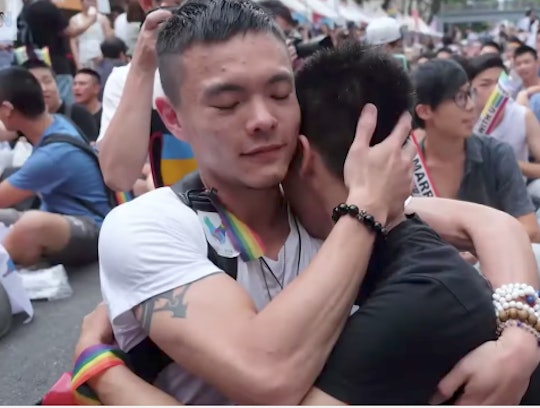 On Wednesday, Taiwan ruled in favor of same-sex marriage, which will likely lead to it becoming the first country in Asia to legalize same-sex unions. According to the BBC, the highest court in the country ruled that current laws there that prevent members of the same sex from getting married violate those individuals' rights to equality and marriage, and that they are, as written, unconstitutional. Specifically, in a press release after the ruling, the court said that the provisions currently in place in their Civil Code, "are in violation of both the people’s freedom of marriage as protected by Article 22 and the people’s right to equality as guaranteed by Article 7 of the Constitution."

According to the BBC, the court's ruling means Taiwan's parliament will have two years to change existing laws, or pass new legislation. CNN reported that the ruling has paved the way for the country to become the first place in Asia to give same-sex couples the right to marry, if no other country in the region legalizes that right before the laws change or legislation is passed.

But there is some fear that new laws may not grant all of the same rights to LGBTQ couples that straight couples there enjoy. Some worry that new legislation may recognize same-sex marriages, but only give those couples some rights, and "not equal treatment in all matters."

The BBC reported that the LGBTQ community in Taiwan, "hopes legislators will simply amend the existing marriage laws to include same-sex couples, which would grant them the same rights enjoyed by opposite-sex couples." Those rights would involve adoption, parenting and inheritance matters — as well as the right for partners to make decisions for each other in medical emergencies. But there are concerns that new laws will only recognize the unions, and not allow for full equality in those areas.

The island's parliament, known as the Legislative Yuan according to CNN, already has draft legislation making its way through the legislative body, but it has stalled. So the ruling by the country's highest court may bolster efforts. Wayne Lin, an activist who runs an LGBTQ phone hotline on the island, told CNN:

We feel that this is a huge success for the LGBT and marriage equality movement in Taiwan.

According to the Sydney Morning Herald, Taiwan's President Tsai Ing-wen vowed to support marriage equality rights after she won and took office last year. CNN reported that in a Facebook video during 2015's gay pride parade in Taiwan, she said: "In the face of love, everyone is equal." According to that outlet, Tsai also said:

I support marriage equality. Every person should be able to look for love freely, and freely seek their own happiness.

And The China Post reported that, in December, lawmakers passed the first draft of a bill to change the Civil Code to legalize gay marriage. The bill was reportedly proposed by Democratic Progressive Party Legislator Yu Mei-nu, and it replaces "male and female parties" in the marriage chapter of the Code with "two parties" instead.

So support for the legalization of same-sax marriages in the country has grown in the political sphere there. However, The China Post also reported that some traditionalist groups, particularly religious organizations, have tried to slow the process of legalization. They have organized several protests against marriage equality, according to the publication.

But CNN reported that thousands have demonstrated in recent months both for and against marriage equality. It's clearly a divisive issue there, but now that the court has determined that not allowing same-sex couples to marry there is unconstitutional, change is coming, no matter what the fractured factions might think of it.

The BBC reported that Taiwan is known for holding the biggest annual gay pride event in the region. It's probably safe to the say that the celebration this year is going to be pretty epic.