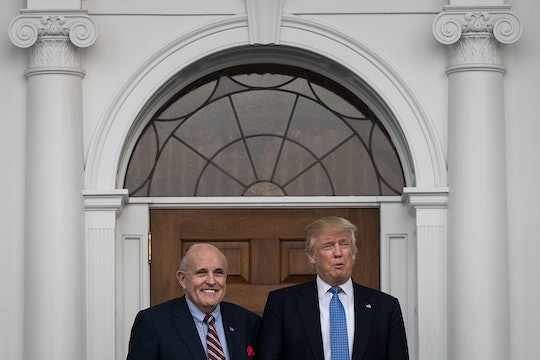 President-elect Donald Trump has some pretty lofty goals. Back in October, he revealed what he hopes to accomplish during his first 100 days in office, and it's staggering. Remember, this is a man who didn't even realize he needed to hire a staff before President Obama told him. So he's turned to the public for help. By taking Trump's 100-Day Plan of Action Survey, American voters, Russian bots, and bored house cats worldwide can tell the president-elect which steps he should take first, because let's face it, he's not getting everything done right away.

Trump's 100-day plan would basically upend the United States, if he were to implement all of it. On the first day alone, he plans to accomplish 18 different tasks ranging from repealing "every unconstitutional executive action, memorandum and order issued by President Obama" to suspending "immigration from terror-prone regions," also known as banning Muslims. The good news is that he can't get it all done in one day, or even 100, and much of it is actually never going to happen. Although his survey doesn't allow for notes, and it's not possible to indicate outright disagreement with any of his positions, users can indicate how important each action is to them, meaning we can get him caught up in busywork while the grown-ups handle the actual day-to-day running of the country.

The survey lists 29 different actions proposed by Trump, and users can rank each one as "Highly important," "Somewhat important," "Not important," or "No opinion." And while it's unfortunate that there's no box to check to tell Trump that building a wall on the southern border, banning everyone but Christians, or deporting everyone who isn't an Eastern European model are horrible ideas that we absolutely do no agree with, we can at least direct him towards other endeavors that are less harmful. Some of Trump's plans are downright impossible; he wants to "End Common Core" even though, as NPR has pointed out, education standards are up to individual states. And he wants to impose term limits on Congress, conveniently forgetting that he'll need the cooperation of Congress.

Other proposals are so vague that they'll probably keep Trump busy for at least the first year of his term, such as "Introduce plan to defeat ISIS" or passing the "Clean Up Corruption in Washington Act," which nobody can explain, other than claiming it will "Drain the Swamp" (yes, Trump capitalizes that, and probably had it trademarked, too). There's even one item on his list that could actually be good: he wants to reform the Department of Veterans Affairs, a notoriously broken system. And after all he's said about prisoners of war, Muslim American soldiers, and soldiers with PTSD, he's certainly in the red in terms of good will towards veterans. Why not rank VA reform as the sole "Highly important" item on Trump's list? Let's just hope he takes his time with it. All of his time.