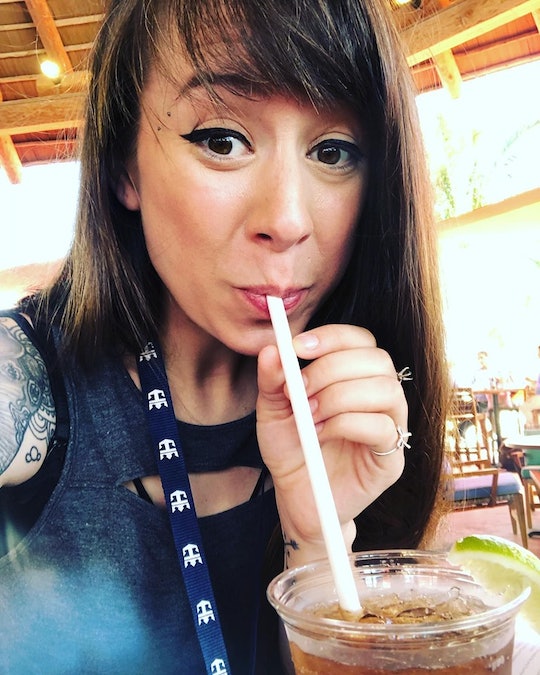 I woke up to the sound of... silence. Outside my window was a seemingly endless ocean; not a speck of land to be seen. I rustled under the white sheet of a kid-free bed, stretching my legs and lazily looking toward the glistening horizon. It was my son's 6 month birthday, and I was thousands of miles away from him on a three-day Royal Caribbean cruise bound for CocoCay, a private island promising me either chill or thrill — for once, my choice.

I should feel horrible, I thought.

The only thing I felt like was an early morning mimosa and a trip to the top deck to lay in a hammock.

I have never traveled by myself before, nor have I traveled outside the country. Coming from a lower-middle class family and having to work my way through college didn't afford me the opportunity to study abroad or take a year off to explore myself as I backpacked through Europe. I worked full-time and went to school full-time while I watched my friends soak in the beauty of Spain or volunteer in Nicaragua, always slightly jealous; always left out; always slightly embarrassed of my upbringing and financial situation.

So I jumped at the opportunity to board an all-expenses-paid voyage on Royal Caribbean's Navigator of the Seasand visit CocoCay, a $250-million dollar private island in the Bahamas. But I was a mother of two with an overwhelming amount of obligations, a full-time job, a partner who works nights, and an exclusively breastfed son. What working mother-of-two has time to take a solo vacation to the Caribbean, right?

Initially, I did feel a tinge of guilt. OK, a lot of guilt. But I shoved that guilt aside to make room for two bikinis, two pairs of shorts, three tank tops, one long-sleeve, thigh-length dress, and a few pairs of shoes, plus the necessary toiletries. On an early Friday morning I tip-toed my way around my apartment, rushing as I gathered last-minute items I should have packed a day prior so I could make my flight to Miami, Florida. I cried as I whispered goodbye to my sons, who were both sleeping soundly, forcing myself not to touch them or wake them.

"You're going to miss your flight," my partner whispered. "Alright, I'm going," I quietly hissed. A quick hug, a quicker kiss, one last glance at both my babies, and I was out the door.

When a person boards the Navigator of the Seas for the first time, it's easy to get overwhelmed. The ship can carry 3,386 guests. As I stepped onboard and walked past cocktail bars and grand staircases among equally excited and overwhelmed guests searching for their rooms, I felt a world away from my postpartum life of diapers changes and late-night feedings and 5 a.m. wakeup calls and constantly urging my 4-year-old to leave the baby alone. I halfway expected to encounter a dapper Jack Dawson waiting for his breathtaking Rose DeWitt Bukater, only because James Cameron's Titanic is my only reference for this level of sea-faring extravagance. (There are, thankfully, no icebergs to be found in the Atlantic.)

Parenthood can and often times does feel like 800 feet of dips and drops.

On the Navigator of the Seas, there are aqua coasters, waterslides that flip you through a translucent tube that lets you survey the ocean. I could play laser tag, try my luck at the roulette table, play a game of mini golf, or team up with some adventurous strangers and navigate an escape room. Parenthood can and often times does feel like 800 feet of dips and drops; or a ride down an endless translucent tube; a never-ending escape room you have to simply attempt to survive. So I bypassed these options, heading straight to The Lime and Coconut — a three-level bar — ordering a rum and Coke, then bee-lining it for a hammock on the rooftop deck.

The private island of CocoCay appears small from the balcony of my room. After departing Miami, at 3 p.m., the Navigator of the Seas had sailed us through the Atlantic at night, docking at the private Caribbean island sometime in the morning and while at least this passenger was sleeping. It felt strange to wake up of my own volition — no unruly alarm clock, no piercing scream coming from the crib in the corner of my room, no 4-year-old sized arm hitting me in the face.

CocoCay, scraped together out of nothing, has the tallest waterslide in North America, aptly named Daredevil’s Peak, at 135 feet. There are also 16 water cannons, the largest wave pool in the Caribbean, a zip line, hot air balloon, and lagoon. The island is split in two: the "chill" side on the left, and the "thrill" side on the right.

Trying to decide how to spend my day in paradise is easily one of the nicest quandaries I have encountered in my almost five years as a mother. It's much easier to decide between lounging near a lagoon or screaming down a waterslide than, say, which school to send my son to pre-K or whether or not it truly is time to wean the baby. As I walked off the ship and towards the island, I realized that whatever choice I made, it would only affect me. In this one, blissful moment in the middle of the Caribbean, I was only responsible for my happiness; my experience; my sure-to-be-sunburnt skin because, no, this vacation n00b didn't think to pack sunscreen.

Thousands of miles away, my 4-year-old son was playing t-ball with other 4- and 5-year-old children trying to harness their hilariously inept hand-eye coordination. Thousands of miles away, my pseudo mother-in-law was cheering him on while my pseudo father-in-law held my 6-month-old son, who was surely smiling because OMG that child never stops smiling.

But I wasn't there to see any of that. Instead, I was holding my flip flops in my left hand, another rum and Coke in my right, and feeling what I had always imagined the people in those Sandals commercials must feel. There was white sand between my toes; the sound of ocean waves hitting against its edges; hammocks strung between coconut trees; everything you associate with #islandlife.

Growing up in Eagle River, Alaska, swimming in the ocean was a considered an idiotic and potentially fatal decision.

On a lounge chair under an umbrella on the "chill" side of the island, I realized that it took a cruise to a man-made paradise to feel more at home with myself. I was finally, after two babies and two bouts of postpartum depression and the relationship squabbles that come with parenthood and the guilt of being a "working mom" and feeling like every part of myself is constantly being pulled in a thousand different directions to fulfill a thousand different obligations and responsibilities, feeling like me again.

I can't tell you how long I laid on the beach, but it was long enough to acquire a sunburn, though nothing that was going to stop me from trying the zipline. Walking up the tower to begin what was one of three zip line stretches, I was privy to a truly breathtaking view of the island and the surrounding water, dotted with happy tourists. Growing up in Eagle River, Alaska, swimming in the ocean was a considered an idiotic and potentially fatal decision, and the only sand I played in was at the Campbell Creek Science Center.

And for the last almost five years I have dedicated every second of my time to a small child or children. Every "vacation" I was able to take, while worthwhile, was taxing; I was exuding an inordinate amount of emotional labor to ensure the time we spent visiting Boston, Philadelphia, Washington, D.C., or flying to see grandma and grandpa in Wisconsin or Yaya in Alaska, was enjoyable for everyone involved. There were no care-free hours spent lounging by a pool or on a beach or even a tattered couch; no sleeping in; no imbibing with what could arguably be considered a few too many cocktails. I had to be "on," the way every parent has to be "on," and as I surveyed this incredibly beautiful private island located in the Bahamas — a place I truly never believed I could afford to experience — I realized that for the first time in a long time, I had the luxury of being "off."

So when I reached the top of that tower and was secured to that 1,600 foot long zip line, I took off. I let my feet dangle over lagoons and waterslides and fellow vacationers from all corners of the globe.

I spent the last evening on the Navigator of the Seas eating alone, at the delicious sushi restuarant Izumi. With my signature sushi rolls and my signature cocktail, I stared out the window at the Atlantic as the ship took me back to my two children, my partner, my job, and all the responsibilities that come with them. And I knew, in that moment, that the next time I visited paradise, I would bring my family with me.

To book a vacation to CocoCay, or any Royal Caribbean Cruise, visit Royalcarribean.com.