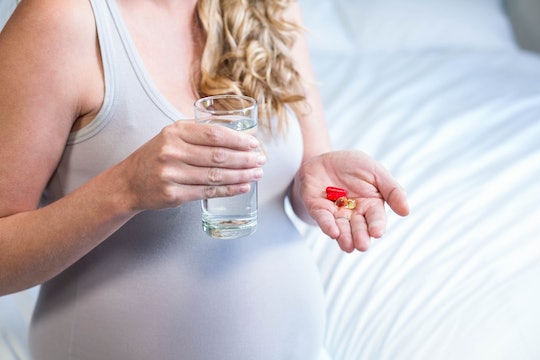 Taking Antibiotics During Pregnancy Could Be Bad For Your Baby's Health, Science Says

New research out of Australia has some health experts concerned with a possible link between pregnant mothers taking antibiotics and an increased risk of their baby or child being hospitalized for an infection later on, the Australian Broadcasting Corporation reported Sunday. According to the research, published in the International Journal of Epidemiology, taking antibiotics during pregnancy might affect your baby's health in a few ways. But several experts said it's not time to freak out about the link just yet, because the actual cause of the higher risk of infection still needs to be explored.

The study in question, from the Murdoch Children's Research Institute, looked at data from more than 750,000 pregnancies from 1997 to 2009 in Denmark. Professor David Burgner from the Institute, who was also a senior author on the study, said children born to moms prescribed antibiotics during pregnancy "may have up to a 20 percent higher risk of being hospitalized with infection," the Australian Broadcasting Corporation reported.

And 20 percent is certainly not something to disregard. The researchers also found that the more antibiotics the mother took and the closer it was to her delivery date, the greater the risk of infection hospitalization.

Burgner also said the results had an interesting gender bias. He told the Australian Broadcasting Corporation:

Males were at higher risk of infection if their mothers had taken antibiotics and the increased risk for both genders persisted throughout childhood.

The findings suggested that antibiotics seemed to affect the "good" gut bacteria babies are passed from their mothers in utero, which could leave the child more susceptible to getting an infection, The Daily Mail reported. Lead author Dr. Jessica Miller said researchers were not exactly sure what caused the higher risk of infection, but she concurred that antibiotics could impact the make-up of bacteria in a mother's gut, known as the gut microbiome. She told the Australian Broadcasting Corporation:

Impact on the gut microbiome could increase the susceptibility to infections in early childhood, possibly by suboptimal development.

The way a baby is delivered also seemed to make a difference when researchers looked at the hundreds of thousands of pregnancies analyzed for the study. For example, vaginally born babies in the study appeared to be at a slightly higher risk of developing infections. Babies who are born vaginally "acquired their microbiome from their mother's gut and birth canal," but Caesarean-born babies picked it up from their mom's skin and from the environment in the hospital, The Sydney Morning Herald noted.

Burgner told the Australian Broadcasting Corporation the findings do seem to suggest that taking antibiotics while pregnant may have longer-term effects on both mothers and babies. He suggested that if the gut microbiome is in fact affected, a doctor could give mothers and babies probiotics instead.

Pregnant women do need to take antibiotics for infections such urinary tract infections, or if they're having surgical procedures.

But he did concede that it's "highly plausible" antibiotics could change a mother's bacteria. Senior research chemist from Centre for Superbug Solutions at the University of Queensland, Dr. Mark Blaskovich, pointed out that the study highlighted some risks associated with taking antibiotics. Blaskovich said:

One side effect is that antibiotics can kill off the good bacteria that naturally live in your body, particularly in the gut.

As far as the risk of antibiotics in general, Burgner said that while this study doesn't mean doctors should stop prescribing antibiotics to pregnant women entirely, they should use caution and obviously only turn to them when necessary. He said, according to The Sydney Morning Herald:

We need to use antibiotics sensibly in all age groups, including pregnant women.

But don't go and throw out that bottle of antibiotics just yet. If you're pregnant and worried about taking any sort of medication during your pregnancy, it's always best to talk to your doctor about your concerns and not only rely on the latest study you read online.

More Like This
Diastasis Recti Exercises You Can Do At Home To Heal Your Abdomen
Is Raspberry Leaf Tea Safe To Drink During Pregnancy?
Is It Safe To Pump While Pregnant? Experts Weigh In
How To Fly Safely During Pregnancy
What Parents Are Talking About — Delivered Straight To Your Inbox