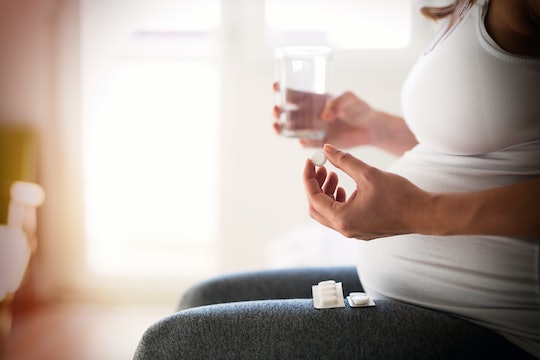 Fish oil boasts a number of uses — predominantly lowering triglyceride (the main constituents of body fat) levels and keeping those with healthy hearts free of heart disease — and now researchers believe that taking fish oil during pregnancy could reduce your baby's risk of food allergies, too, according to the BBC. Taking a daily fish oil capsule during pregnancy and the first few months of breastfeeding will make you and your baby feel better.

Researchers estimate that up to 15 million Americans have food allergies, with children under the age of 18 making up 5.9 million of those Americans, according to Food Allergy Research & Education. That means that one in 13 children, have allergies, caused by the malfunctioning of the immune system, which triggers symptoms such as rashes, swelling, vomiting and sneezing.

But new research from Imperial College London and commissioned by the UK Food Standards Agency confirmed that diet in pregnancy could influence the development of allergies in early life, according to Forbes. Taking a daily fish oil capsule could lead to a 30 percent reduction in egg allergy risk by the age of one, for example.

Fish oil contains omega-3 fatty acids, which have a positive, anti-inflammatory effect — and fish that are especially rich in the beneficial oils include mackerel, herring, tuna, salmon, cod liver, whale blubber, and seal blubber, according to WebMD. Two of the most important omega-3 fatty acids contained in fish oil are eicosapentaenoic acid (EPA) and docosahexaenoic acid (DHA).

Fish oil is typically used to treat conditions related to the heart and blood system, such as to lower triglycerides, blood pressure and cholesterol levels. In fact, according to Web MD, fish oil is especially beneficial to pregnant women for a number of reasons. By taking fish oil, research shows that the supplement can prevent miscarriages, as well as increase the rate of live births for pregnant women who have the autoimmune disorder antiphospholipid syndrome, noted RxList.

The National Health Service (NHS) currently advises pregnant women not to eat any more than two portions of oily fish per week because of the levels of mercury in some fish, and to avoid shark, swordfish, and marlin altogether. But after looking at 19 trials of fish oil supplements taken during pregnancy involving 15,000 people, researchers have found that the reduction in allergy risk actually equates to 31 fewer cases of egg allergy per 1,000 children, according to the BBC.

They also looked into the impact of probiotic supplements taken during pregnancy and found a 22 percent reduction in the risk of eczema developing in children up to the age of 3, according to Forbes.

The researchers' suggestions for pregnant women, therefore, negate that of the NHS.

"Our research suggests probiotic and fish oil supplements may reduce a child's risk of developing an allergic condition, and these findings need to be considered when guidelines for pregnant women are updated," said lead author of the research from the department of medicine at Imperial College London, Dr. Robert Boyle, according to the BBC.

The study found "no supporting evidence that avoiding certain allergenic foods, such as nuts, dairy, produce, or eggs, during pregnancy had any protective effect on children," the New Scientist reported.

But Dr. Louisa James of the British Society for Immunology told the BBC there were still questions to answer regarding the impact of severe food allergies. The studies using fish oil supplementation all measure allergic sensitization to egg as a surrogate measure of food allergies, she explained. And although sensitization is necessary for allergies to develop, a lot of children may be sensitized without ever developing any symptoms of allergies.

"It will be important to determine if fish oil supplementation can reduce the risk of clinical food allergy," she said, according to the BBC.

Still more research needs to be done on the possible role of maternal fish oil supplementation in the prevention of childhood allergic disease. Larger studies that follow children up to school would provide more insight.