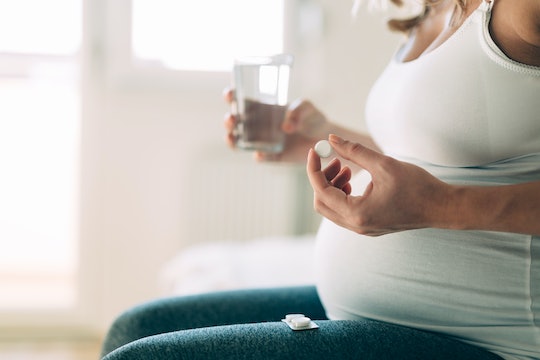 Taking These Common Painkillers During Pregnancy Could Affect Your Baby's Fertility, Study Finds

Headaches, back aches, sore feet — the list of reasons to pop a painkiller during pregnancy is long and varied. But pregnant women can't take just any over-the-counter medicine to deal with their aches and pains. One reason for caution: taking ibuprofen or acetaminophen during pregnancy during pregnancy could impact babies' fertility later in life, according to a recent study. There are options for pain management during pregnancy, but expectant mothers should be aware of the risks associated with some forms of pain killers.

Researchers at Edinburgh University looked at how two over-the-counter pain killers, ibuprofen and paracetamol (also known as acetaminophen) impacted the fertility of unborn children later in life, sampling tissue from fetal testes and ovaries for changes. Tissue samples that were exposed to either drug had reduced germ cell counts — the cells that later form sperm and egg cells, according to Parents. It was not determined how exactly the medications cause tissue damage.

The study, published in the journal Human Reproduction, found that ovaries after one week of paracetamol had 40 percent fewer germ cells, and those exposed to ibuprofen had 50 percent fewer. These results are particularly shocking, according to Séverine Mazaud-Guittot, the lead author of the study and a researcher at INSERM in Rennes, France, as they can have lasting consequences. "Baby girls are born with a finite number of follicles in their ovaries," she told Parents, adding that reduced eggs supplies can "result in a shortened reproductive life span, early menopause or infertility — all events that occur decades later in life."

The impact on testicular cells was not as severe, but still notable with 25 percent fewer germ cells after a week of exposure to either medication, the BBC reported.

Researchers in the study stated that their findings reinforce existing evidence that some medications should be avoided or used with caution during pregnancy. Dr. Rod Mitchell, lead researcher and co-author in the study and professor at the University of Edinburgh's MRC Centre for Reproductive Health told the BBC that official recommendations for medication usage during pregnancy have not changed:

We would encourage women to think carefully before taking painkillers in pregnancy and to follow existing guidelines — taking the lowest possible dose for the shortest time possible.

Aside from fetal reproductive damage, ibuprofen use during pregnancy has also been linked to an increased risk of miscarriage. A study published in the Canadian Medical Association Journal found that taking medications classified as non-steroidal anti-inflammatory drugs (NSAIDs) — including ibuprofen, naproxen and Diclofenac — during the first 20 weeks of pregnancy increases a woman's risk of miscarriage by 2.4 times, according to The Guardian.

After 30 weeks of pregnancy, ibuprofen usage has been shown to increase pregnancy complications, including heart problems in babies and a reduced amount of amniotic fluid — which reduces the cushioning around the baby and puts more pressure on the umbilical cord, according to the National Health Service (NHS). However, if you mistakenly took ibuprofen before hitting 30 weeks without suffering a miscarriage, the NHS stated that there is likely not cause for concern.

If you are pregnant and in pain, first consult your doctor to see what your best options are for managing it. Generally, taking the recommended dosage of Tylenol (or another brand of acetaminophen) listed on the bottle is considered safe, according to Fit Pregnancy. But medication isn't the only way to avoid pain. For example, staying hydrated is key to fighting off headaches and stretching is a good way to reduce back pain. No one likes being in pain, but before you head to the medicine cabinet make sure that you have all of the facts.