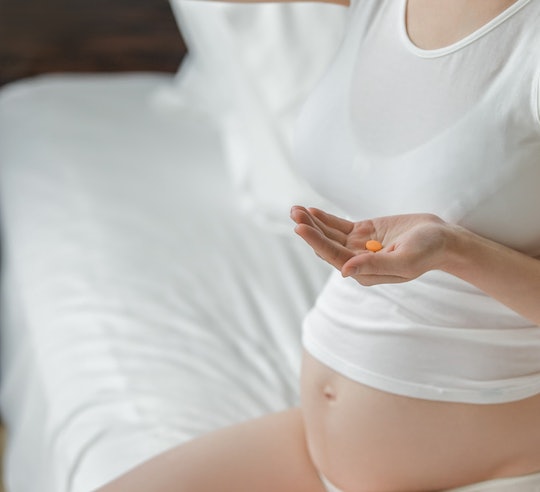 This Could Be The Solution To RPL

When someone experiences more than two miscarriages before they reach 20 weeks pregnant, they are said to have Recurrent Pregnancy Loss. Researchers want to better understand how to help those who have struggled to carry pregnancies to term, and new research shows that taking progesterone might help prevent Recurrent Pregnancy Loss, according to a study published in the journal of the American Society for Reproductive Medicine.

Recurrent Pregnancy Loss (RPL) is usually diagnosed when a person has had more than two pregnancies confirmed by ultrasound that miscarry before 20 weeks. Biochemical pregnancies, detected by tests but not confirmed with an ultrasound, are usually not included in making this diagnosis, according to the American Society for Reproductive Medicine (ASRM).

There are many reasons that RPL may occur: genetic factors, problems with the uterus itself, and certain lifestyle factors like smoking can increase the risk of RPL. At least half of all cases of RPL have causes that seem to defy explanation. The ASRM said that even after three miscarriages, the chance of conceiving and carrying a full-term pregnancy is still between 60-80 percent. With reason to hope, researchers have been looking for ways to support pregnancies that are at-risk for miscarriage and help them get to full-term.

This latest research, from the University of Illinois together with Yale School of Medicine, looked at how one common hormone could be used to help these pregnancies progress. Progesterone is a naturally occurring hormone that's a big part of the reproductive cycle. The name, which is a portmanteau of "pro-gestational hormone," should give you a clue about just how important it is to pregnancy. Progesterone helps the placenta function and keeps the lining of the uterus healthy as it expands to accommodate the growing fetus.

Researchers started by identifying which women in the study had a marker known as nCyclinE, which is associated with a high-risk of miscarriage. Of the 116 women in the study, 59 had high levels of nCyclinE. These women, who had experienced at least two prior miscarriages, were given a progesterone supplement. Administered vaginally, the supplement was taken during the second half of their menstrual cycles while they were trying to get pregnant, with the dose continued for the first 10 weeks of their pregnancy.

The results were very encouraging: 68 percent of the women who got the progesterone supplement went on to have healthy pregnancies. The rate of a healthy pregnancy amongst these women before the progesterone treatment was just 6 percent. Researchers pointed out that this was an observational study, so they can't conclude causality — but they do think that the outcome should promote more research into progesterone's benefits in preventing miscarriage.

The results of this study led researchers to believe that progesterone helps make the uterine lining healthier and more robust, meaning it can better support a pregnancy. Previous research that examined how RPL occurs found that often, the fetus is not able to get enough nutrition from the placenta to sustain itself. By ramping up the placenta's ability to produce nutrients, and the uterine lining's ability to support the placenta, researchers think progesterone supplementation could help prevent pregnancy loss that results from issues in these locations.

More research is needed, but for those who have suffered several miscarriages, the safety, ease, and affordability of something like progesterone supplements could be a major beacon of hope.