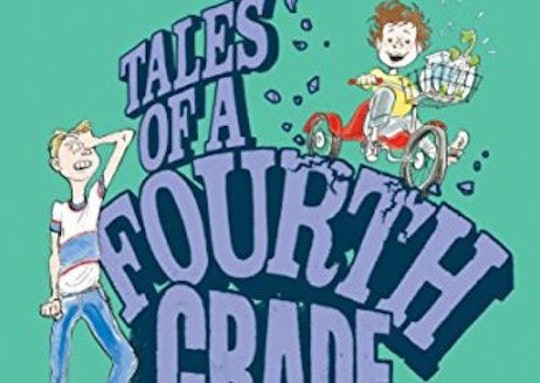 The Anarchic Children's Book That Represents Summer To Me As A Mom, Still

My childhood summers were spent at a Catskills bungalow colony upstate, two hours away from our Queens apartment. During the week, it was me, my mom, and my younger brother; my dad drove up on weekends. We didn’t have a TV. We had a rusty swing set, a tiny pool, and endless lawn to run around on. Every weekday, a beat-up van took us to a local, no-frills day camp, and every evening we snuggled on my parents’ rickety bed, the cool mountain air seeping through the warped window screens, to hear the next chapter of Tales of a Fourth Grade Nothing.

We’d make weekly pilgrimages to the quaint local library in the little Catskills town where we spent every July and August. I can’t recall the titles of the endless junky tween paperbacks with pastel cover art I consumed, but when I first checked out Tales, I was also going into fourth grade, like the hero, Peter Hatcher.

Like me, Peter had a little brother, Farley (aka "Fudge"), and two parents, and lived in the city. I loved recognizing the settings in the book — Central Park and Bloomingdale’s. I relished how the book was from the 9-year-old’s point of view. Finally! Someone who got me, at the same point in my life, navigating contentious sibling relationships and feeling a little deprived of attention, since I was the older, less cute child, with growing responsibilities and not enough space to myself.

I had been reading to myself for a while already, and suspect I urged my mother to read it aloud to us. Having the book read to me kind of leveled the playing field. We — my mom, my brother, and me — were in the story together. I wasn’t being told to go read to myself, while my kindergartner brother got time with my mom.

It was a book we could all relate to. I totally felt Peter’s frustration with Fudge’s toddler antics. My younger brother of course thought Fudge was hilarious; in the purity of his pre-schooler mind, eating turtles and coveting older siblings’ bikes was right on. And my mother, who was seeing the story through the lens of a parent raising two children in New York City, would howl with laughter as she read to us. Tears streamed down her cheeks when she got to the part of the of the story where Fudge empties a bowl of food on his head at a restaurant, copying his father in an earlier scene who was making good on his “eat it or wear it” threat by dumping Fudge’s uneaten peas on his young son (after placing him in the tub to sidestep a major clean-up, of course).

To this day, my mother will recite the “Eat it or wear it” catchphrase if my kids exhibit picky behavior at the dinner table. And hearing that sing-songy riff takes me right back to that summer when I was 9.

There are not that many happy places when you’re dealing with the horrors of middle school and hormones. So the good reads stand out.

When I had kids, I knew there were certain books I couldn’t wait for them to read. I wanted to share the stories that were so meaningful to me as a child, and that I still carry around as fuzzy, warm memories. As much fun as it was to introduce them to The Snowy Day and Hop on Pop, I was really looking forward to those books for older readers. Certain stories I consumed when I was a tween, through my teens, have lodged squarely in my mind as the happiest places to revisit — there are not that many happy places when you’re dealing with the horrors of middle school and hormones. So the good reads stand out.

A couple of years ago, when my daughter was 8 and my son was 5, I read them Tales of a Fourth Grade Nothing for the first time. This time, I was the mom. While I still empathized with put-upon Peter, I connected most to the parents in the book: their exasperation with their strong-willed son, their exhaustion of having to make everything “fair” for two children with very different needs, the lack of living space when you’re raising a family in a New York City apartment.

And as a mom, I had a better understanding of Fudge. Here was a little boy trying to define is place in his family, through calamity and tantrums and charming baby talk. My own children have been the “Fudge” in our family at times. He was irritating, and lovable. A fully realized character, even though he was only 2-and-a-half.

Reading the book to my kids transported me right back to those summers in the Catskills as a child. To a world bigger than the apartment; as big as childhood felt at the time. A place for kids to imagine themselves writ large, and for parents to live in both places at once.

More Like This
Searching For Home As A Lifelong Renter
Home Reno Culture Makes Me Feel Like I Live In A "Before" House
I’m Getting Dual Citizenship For My Jewish Children, Just In Case.
25 Mother And Daughter Halloween Costume Ideas That Are Cute And Spooky