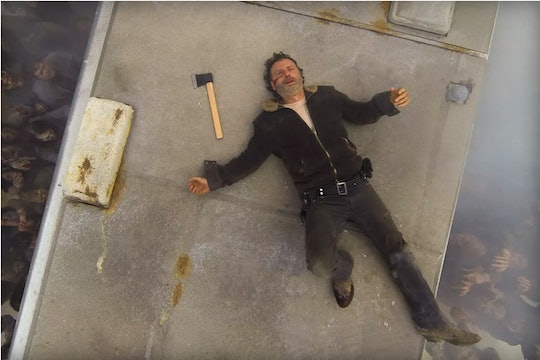 Starting this article feels a lot like writing a eulogy for someone's funeral. It's hard to do when losing someone leaves you speechless, especially since just last night I went through the five stages of grief processing Glenn's death on The Walking Dead. I saw it coming for Abraham, because karma... but not Glenn. His heart of gold didn't deserve this. It wasn't only hard for me to digest, to no surprise, the cast members also had difficulty. Like a real funeral, the premiere was held at a cemetery, and each member had his or her own things to say about the deaths. So, let's all hold hands, light a candle and cope together with Talking Dead Season 7 premiere quotes that provide insight on Negan's wrath.

But before we do, it's interesting to point out that after the airing of the episode, it started to rain — as if the sky was mourning Glenn with all of its viewers. It drizzled, and then it really poured when Jeffrey Dean Morgan (Negan) came out. I mean, c'mon the show obviously traumatized us all, including our lovely planet. The weather was in denial, like me, and then finally experienced acceptance in it's downpour. This must have been convenient for all the male viewers at the event, "these are not tears, they're raindrops, Susan!" Too bad the actors couldn't use that excuse. So, what is the cast of The Walking Dead saying about that crushing premiere?

In the episode, Norman Reedus (Daryl) lost his powerhouse friend, and the actor had some sentimental words. “We are such a close family… we do suffer for this show and it means a lot to us, and to feel that from [the audience] is kind of awesome.” Welp, we feel your pain, Reedus!

Steven Yeun, fighting back tears the entire after-show, optimistically admitted that he wanted Glenn to go out this way.

“The death in the comic Robert (Kirkman) wrote was such a messed up, but at the same time incredible way to take something away, and make a story as impactful as it is,” he said. “When you read that comic you kind of don’t want that to go to anyone else. I think I even said ‘don’t give that to anybody else.”

You have to give it to Yeun, the brutal death he accepted is a memorable one. He went out with a bang.

In case you missed it, Glenn's final words were directed to his love, Maggie. "I will find you" he whispered. Ugh, Glenn, perfect even with brain damage and a dangling eyeball. This angel was always one to take one for the team, and sacrifice himself for others, so in a way it makes perfect sense that he would be one of Negan's victims.

Lauren Cohan (Maggie) had a mouthful to say in regards to the passing of her on-screen hubby.

"It's changed the dynamic for us on the show and what will come this season. "The gravity of losing these two has galvanized us and has had such a crazy effect on all of us. I think we can all say after shooting that episode that it was a whole new frontier for us."

A choked up Cohan described the couple as "star-crossed lovers." She went on to define Glenn's last words as "I'll find you. I'll be with you. I'll watch over you and the baby. I'll be there."

Creator Robert Kirkman also commented during the Talking Dead, explaining how killing off fan favorite's Glenn was necessary to the evolution of the show.

“I think more than anything, the introduction of Negan, as heartbreaking as it is and as gut-wrenching as it is, was really to just set the stage in a way of saying, you know, this show, this story isn’t going anywhere. We still have a lot more to do. We’re setting the stage for a lot more to come. There is so much that comes out of this scene that has to be resolved."

Michael Cudlitz (Abraham) then spoke after Yeun on his character's classy last words: "suck my nuts."

“These guys [the show’s writers] had a tough time inserting any dialogue with Abraham because of where we left last season. There was no interaction with the rest of the group, [so] to actually insert something in there was very very awesome.”

Cudlitz was always as fiery as his red beard, so his final words fired from his mouth suitably, like ammunition from a gun.

The last person to come out on the Talking Dead was Jeffrey Dean Morgan (Negan), a.k.a. the guy I kept cursing at my TV screen for. He justified Negan's actions saying “Remember, they took out quite a few of my folks. And remember, if it weren't for Daryl, Glenn would still be alive!" Excuse me Morgan, but nothing justifies killing Glenn. Nothing!

~Sharply exhales~ At the end of the day, us Walking Dead fans are all a little Maggie for Glenn, but we'll get through this. He would have wanted us too, anyways. Until then, I'm still in denial. Hold me.