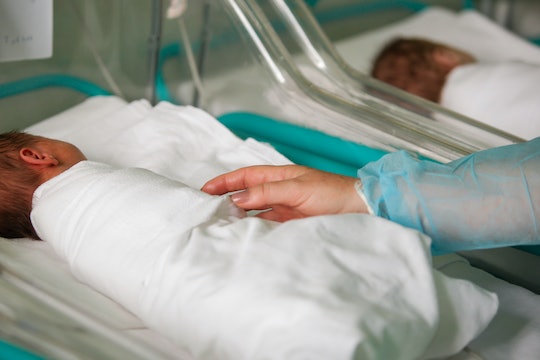 Talking To Your Baby In The NICU May Help Them Sleep More Soundly, New Study Finds

It's an idea that spans generations: there's no hurt that a mother's love can't soothe. Although it might have once seemed like an old wives' tale, it appears there's some truth to those words. In fact, as a new study has found, talking to your baby in the NICU may help them sleep more soundly in the moments while they're still in the hospital.

For those unfamiliar with the term, NICU stands for Newborn Intensive Care Unit, specializing in the treatment of infants and newborns. As noted by the C.S. Mott Children's Hospital website, "newborn babies who are born early or who are ill may need specialized care". Not only can it be stressful for any parent to find out that their baby needs to be in an intensive care unit, but the experience can be stressful for the baby as well. And, as most parents know, when kids are stressed, sleep is one of the first things to go out the window.

In a June 2018 abstract presented for Sleep Medicine hosted by the Associated Professional Sleep Societies, researchers shared that they found playing recordings of mothers reading children's book helped babies sleep and wake up less often. The study involved 50 babies born after at least 33 weeks of gestation in the United States. According to C.S. Mott Children's Hospital, researchers also made sure to only include infants who were medically stable, lacking any congenital conditions that increased risks of sleep troubles, so the results would not be skewed.

"In the hospital, we take care of babies who are not in their usual environment, which can hinder their ability to have normal sleep," lead author Renée Shellhaas, a pediatric neurologist at University of Michigan C.S. Mott Children's Hospital, said of the study's findings, according to a press release for the study published on the university's website.

Although hospitals do their best to provide calm environments, there are some unusual sounds that just can't be eliminated. As the study noted, the sounds of ventilators and other equipment can prove disruptive, for example. For researchers, finding ways to improve infant's sleep became important because, well, sleep is incredibly important.

Usually, kids sleep a lot — even if it doesn't always feel that way to their parents. According to the National Sleep Foundation, by the age of 2 children have spent more time asleep than awake, and will spend 40 percent of their childhood asleep overall. The National Sleep Foundation notes that sleep is especially important for children because it has a direct impact on their mental and physical development.

In this study, researchers collected their data by playing the mother's recording for six hours and then going six hours without, in order to compare throughout the night. Although sleep patterns changed for babies born at 35 weeks or older, according to C.S. Mott's Children's Hospital, there wasn't really a big change in the REM cycle of babies born more preterm.

"Sleep is a very complicated phenomenon influenced by many aspects of the ICU environment and the baby's condition. Another factor may be touch and how often a baby is held or handled," Shellhaas said in the study's press release.

The importance of human contact for infants has been touched on in research and even showcased in medical dramas. For example, in one Grey's Anatomy episode, character Alex Karev helped a preterm infant survive the night by holding them while shirtless, demonstrating the "Kangaroo Hold". And, as noted by ABC News, the Kangaroo Hold really does exist; it's essentially holding the baby against your chest, so they have skin-to-skin contact. It was initially developed in Bogota, Colombia during the 1970s, according to ABC News, as an alternative to incubator care for babies who required intensive monitoring, such as premature and low birth weight infants.

Colombia also had a tragic mortality rate of 70 percent due to infection, respiratory problems, lack of attention from a parent, and not enough resources or funding," Meg Marinis wrote in 2009 for ABC. "However, once the Kangaroo Hold technique began to be implemented, that mortality rate quickly dropped."

In an interview with Scientific American, Ann Bigelow, a professor and researcher of developmental psychology at St. Francis Xavier University, noted the importance of skin-on-skin contact in the newborn period. "It helps calm babies; they cry less and it helps them sleep better," Bigelow said.

Researchers at C.S. Mott's Children's Hospital acknowledged that more studies need to be done to help explore the intricacies of sleep in infants, but they're on the right track. And for babies who may medically be unable to be held, it is good to have research highlighting the importance of a mother's voice while in the NICU.