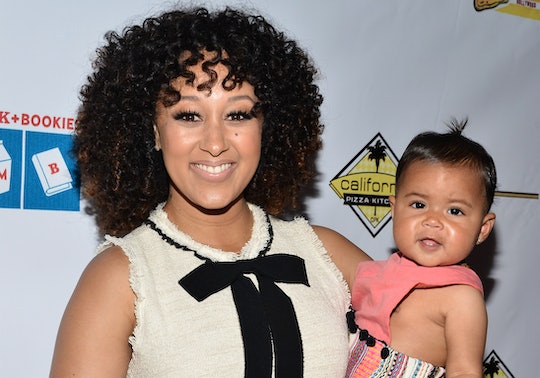 One half of the Sister, Sister duo sat down with Us Weekly recently, and because she's a mother, the inevitable topic of her children came up. She seemed happy to discuss recent developments with Aden, age 5, and Ariah, age 2, but when Tamera Mowry was asked about having more kids — which is pretty invasive to begin with — things got pretty awkward. Sound familiar, ladies?

If you're a cisgender woman of child-bearing age (particularly if you're in a monogamous relationship with a dude), you've probably been asked by everyone from your aunt to your dentist about your family planning. "Are you having kids?" "When are you having kids?" "When are you having more kids?" "Why do you have so many kids?" Not to mention all the additional unsolicited questions and comments that come along with pregnancy or parenting, like your birth plan, breast versus formula, discipline, how you style their hair, and all the other details that are nobody's business but yours and your co-parent's. It's curious that the world feels entitled to this information, and what's even worse is that everyone seems to think they know what's best for women better than they know themselves.

And yes, I do mean just women, because in all my life, I have never seen anyone ask a man about his family plans, unless the inquisitor was addressing a couple, and even then, we know who they're really asking: the one who can carry the baby. But the most infuriating part is how hard it is to get people to accept your decisions if you are gracious enough to share them — and to be clear, you're under no obligation to do so. If you'd rather not, try acting surprised and replying, "Wow, what an incredibly personal question about my reproductive choices," then staring at your interrogator like they just told you they're secretly a lizard person.

Mowry gushed about her "strong-willed" son and her toddler, who's just starting to speak in full sentences, before volunteering, "Usually, this is the time when you think about having another child, but I'm done." That's perfectly reasonable! Her interviewer then asked, "You're done? 'Cause I was gonna ask..." Mowry then doubled down (or more accurately, sextupled down): "Done, done, done, done, done, done. I love it." Seems to me like she's pretty confident in her decision.

You'd think that would have been case closed, but Mowry was then asked if seeing her sister, Tia, pregnant hadn't given her the urge to procreate. "No," she replied. "Absolutely not." And why would it? If a woman already wanted to have a child, sure, seeing someone else accomplishing her goal could inspire a little jealousy, especially if that person happens to look exactly like her, but I can't imagine anyone who's already been through two pregnancies and decided she's finished suddenly changing her mind because she'd forgotten just how fun swollen feet were.

And to be fair, the conversation was carried out in a lighthearted manner. Mowry didn't express any discomfort, the interviewer wasn't grilling her, and they both smiled and laughed throughout the conversation. But that just goes to show how we've all been socialized to accept this kind of questioning. Imagine, for a moment, someone pestering Chris Hemsworth to have more children. Did you even know that he has three already? Probably not. Because parenting is tied to a woman's identity in a way that is seldom applied to men. A man with kids is thought of as father only in context; when he's with his kids. But a woman with kids is considered a Mother with a capital M, first and foremost. Even women without kids are considered potential or future mothers. Society would do well to remember that behind that reproductive system is a three-dimensional person.